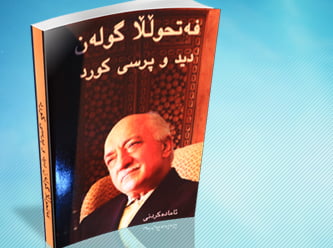 A book written by Kurdish journalist Rebwar Karim on Islamic scholar Fethullah Gülen‘s approach to the Kurdish question has been attracting a significant amount of attention in northern Iraq.

All copies of Karim’s “Fethullah Gülen and the Kurdish Question,” published in Sorani, a dialect of Kurdish, were sold out at the Arbil International Book Fair, running from April 2-12. The head of Iraq’s Kurdistan Regional Government (KRG), Massoud Barzani, also bought a copy during his visit to the fair, which has contributed to the book’s popularity.

Speaking about the book’s success to the Cihan news agency, Karim said he was very pleased with the positive response the book had found from both top-level politicians and locals. He also said northern Iraq’s Turkish schools, inspired by Gülen’s Hizmet movement, offer quality education and have the full appreciation and support of locals.

“This is the first time a book about Fethullah Gülen has come out in the Kurdish region. The book is about Gülen’s biography, thoughts and particularly his approach to the Kurdish question,” Karim said.

The book also explains the role of the Hizmet movement in the success of Turkey’s Justice and Development Party (AK Party). The book includes excerpts from interviews Karim has conducted with Gülen. He also said that, as a Kurd, he was very impressed with Gülen’s description of Kurdish as “sacred as mother’s milk.”

He also recalled that Gülen had reacted strongly against the Halabja chemical attack in 1989, while the entire world kept silent about it.

Karim said a recent poll conducted by the Rudaw Publishing Group in northern Iraq showed that 80 percent of locals are against the closure of Turkish schools in the region. The AK Party government has been pressuring Turkey’s neighbors to shut down schools operated by individuals affiliated with the Hizmet movement. “The education quality in Turkish schools is really high,” Karim said, adding that a student who attends such a school will speak at least four languages when he graduates.