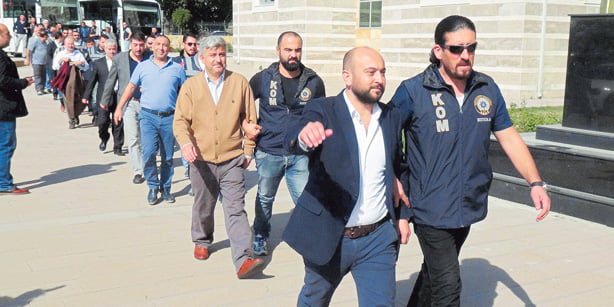 Numerous businessmen in Uşak province were detained last week as part of a government-led investigation into the so-called “parallel structure.” (Photo: DHA)

Police teams from the Uşak Police Department’s Anti-smuggling and Organized Crime Unit carried out simultaneous raids on a number of residences and workplaces on Oct. 14, detaining 25 businessmen from Uşak city center and its districts. However, 23 of them were released as their detention was undeserved and based on the reasonable suspicion clause that was introduced by the Justice and Development Party (AK Party) in February under a controversial security bill that was strongly opposed by other parties in Parliament.

The AK Party’s reasonable suspicion act was most recently criticized when the party’s chairman and interim Prime Minister Ahmet Davutoğlu said the government had a list of potential suicide bombers but could not make any arrests without them having carried out an attack. Davutoğlu’s statement, which came after Turkey’s deadliest suicide bombing in Ankara on Oct. 10, sparked heavy criticism and raised the question of how it is that the government does not detain previously identified suicide bombers but that it leads police operations into philanthropic businessmen and detains them based on reasonable suspicion.

According to information acquired by Today’s Zaman, the 25 businessmen, who are known for their social activism and charity work among locals, were accused of being part of an illegal organization — the parallel structure — on the grounds that they had “performed prayers together, eaten ice cream together at a pastry shop [that is open to public], had their iftar [fast-breaking dinner during Ramadan, the holy month of Islam] together at a restaurant.”

After they were released, as such activities could not constitute evidence, one of the businessmen, obviously distressed, spoke to the press in front of the police station on Friday and said: “A businessman cannot be detained for three days for going to a pastry shop; there is no such country. There is no such justice [system]. Cannot a businessman go to a pastry shop? I was held behind bars because of this, away from my children, my wife and my business.”

Many people in Turkey believe that by conducting such investigations and police operations into the so-called parallel structure, the AK Party government aims at intimidating and browbeating the sympathizers of the Gülen movement, also known as the Hizmet movement, which is inspired by Turkish Islamic scholar Fethullah Gülen.

The term “parallel structure” was coined by the former AK Party chairman and current President Recep Tayyip Erdoğan in order to defame the Gülen movement so that he can carry out the unlawful fight against its sympathizers, accusing them of allegedly creating a parallel structure within the state. Erdoğan’s fight against the Gülen movement began when his inner circle was implicated by a graft probe that went public on Dec. 17, 2013 when he was serving as prime minister.

When four of his ministers were implicated for allegedly receiving a huge amount of money in bribes, the then-prime minister accused the Gülen movement of attempting but failing to overthrow his government through its supposed sympathizers within the police department and judiciary who were carrying out the investigations. Because Erdoğan was putting all of his efforts into protecting the four ministers, to the point of initiating a war against a civil movement that is not only admired in Turkey but that is praised globally, many people at the time suspected him of being part of the accused circle of high-level officials involved in bribery scandals. Later in 2014, the war on the Gülen movement intensified with voice recordings that were leaked from the corruption investigations’ file allegedly featuring Erdoğan’s voice ordering his son to dispose of a vast amount of cash.