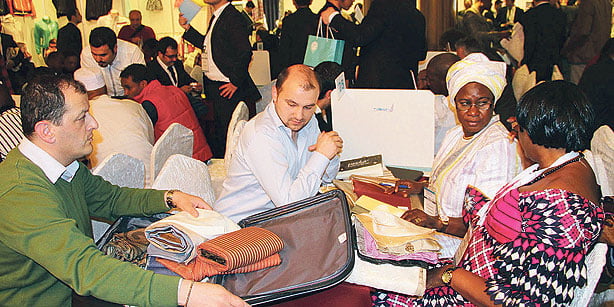 African businessmen and ambassadors stress that they have developed trade relations with Turkey thanks to Turkish schools acting as bridges in their countries, although the ruling Justice and Development (AK Party) government is planning to shut down Turkish schools abroad that are affiliated with the movement of Islamic Turkish scholar Fethullah Gülen.

Speaking at the “Turkey-West Africa Trade Bridge” business event organized by the Turkish Confederation of Businessmen and Industrialists (TUSKON), which is running from April 13-16 with the aim of boosting Turkey’s trade volume with West African countries, Guinean Ambassador to Turkey Daouda Bangoura said Turkish schools in Guinea are important for the economic and cultural interaction between the two countries, adding that they wish for new Turkish schools to be opened in their country.

Amadou Faal, a businessman from Senegal, said Turkish schools have paved the way for him to attend this TUSKON event. “If it would be up to me, I want a hundred Turkish schools to be opened [in Senegal], because those schools are important and attractive for not only its education quality but also ethical values taught,” he added.

Makiyou Dieme, another businessman from Senegal also stressed that Turkish schools play an important role in Senegal on Turkey’s promotion. “If those schools are closed down all ties with Turkey will be cut and knowing Turkey and conducting business will get harder [for Senegal],” Dieme said.

In return for a loan of $300 million from the Turkish government to Gambia, the Turkish schools in the country were closed last month, according to some reports in the Turkish media. Prime Minister Recep Tayyip Erdoğan personally asked Iraqi Kurdistan Regional Government (KRG) Prime Minister Nechirvan Barzani to close Turkish schools in the autonomous region of Iraq, according to sources close to the KRG prime minister. Erdoğan also called on the administration of Pakistan’s Punjab region to shut down its schools linked to the Gülen movement.

The attempt to shut down these schools comes at a time in which the Hizmet movement is being subjected to a smear campaign by the Turkish government, whose prime minister and many high-level officials have been implicated in a sweeping corruption scandal that went public on Dec. 17, 2013.

Speaking at the opening of the event on Monday, TUSKON head Rızanur Meral said Turkish schools — which are now in about 160 countries — can’t be shut down by an order from the Turkish government, since most of them were founded by private entrepreneurs. He said there are demands for 500 new schools every year, highlighting the huge demand in host countries for more investment in education.

The Turkish’s government call for the shutting down of Turkish schools abroad has tarnished Turkey’s global reputation, says Meral. He said the schools are founded as a form of foreign investment and are in line with the laws of their host countries. Because of this, the Turkish government cannot shut down such schools abroad. Meral said officials in many of the countries that host Turkish schools have asked for more of these schools to be opened to help remedy issues in the field of education.

The business forum, which took place in the western province of Bursa, brought together more than 100 businessmen from eight African countries to hold bilateral meetings with 300 local businessmen from Bursa.

During the event, Gambia Chamber of Commerce and Industry General Manager Beatrice A. Prom said Turkey is a new market for African businessmen and that all their expectations regarding doing business in Turkey have been satisfied by the TUSKON event. “After bilateral business talks here, Turkey and Gambia will establish a business partnership,” Prom said, thanking the teachers in Turkish schools for paving the way for their participation in the event in Bursa.

TUSKON often holds similar events, where thousands of businessmen from all over the world convene and discuss business deals worth billions of dollars every year.

Loretta N. Bonsu, a Liberian businesswoman, said that she has conducted very fruitful business negotiations during the TUSKON event, adding that Turkish people are very kind and friendly and the Turkish schools in their countries are very precious fo Africans.

Speaking at the event, Ancela Silva from Cape Verde stressed that the people of Cape Verde have developed good relations with TUSKON, and they had the opportunity to establish good business connections with their Turkish counterparts.