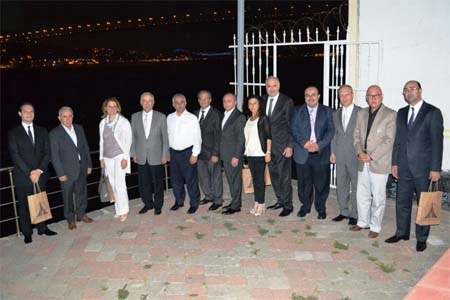 “Abraham’s Table Gatherings” by Intercultural Dialogue Platform (KADIP) continues with the participation of diverse faith, religion, culture and ethnicity leaders. The guests of the series in May were representatives from the Orthodox Assyrian community.

Through the gatherings, KADIP under the umbrella of Journalists and Writers Foundation intends to get together, every month, with another culture or faith’s members, leaders and officials.

As a part of the series, JWF President Mustafa Yesil and board members came together with their counterparts from Orthodox Assyrian Church of Mary Foundation-President Sait Susin, along with its board members.

Following the dinner, discussions over the phases the understanding of “coexistence’ went through in Turkey took place at JWF Kuzguncuk branch. The president Susin praised JWF for its efforts to communicate the principle “accepting people as they are” to every segment of society.

Highlighting “the inability to teach Assyrian language” as their biggest problem, Susin appealed support from civil society organizations to be able to make themselves heard for a solution.

Through “Abraham’s Table Gatherings”, KADIP is seeking to get together with leaders and officials of diverse cultures, faiths and ethnicities and exchange opinions.

Source: Published [in Turkish] on KADIP, 23 May 2013. English translations is retrieved from Hizmetmovement.com

A world-renowned scholar who has written numerous books on Islamophobia has urged Muslims living in the West to integrate into mainstream society, which he says is the most effective way to defeat the Islamophobia that is taking hold in the West, particularly in Europe.