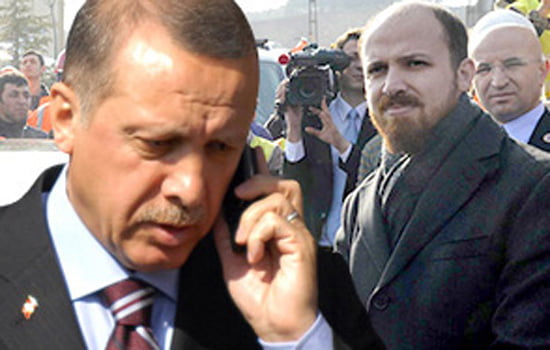 An audio recording uploaded onto YouTube by Twitter user Başçalan (Prime Thief) purportedly has Erdoğan talking to his son to arrange a time to meet and assess their measures in reaction to the investigation. A voice allegedly belonging to Bilal is heard telling his father that he is not sure whether to say it over the phone or not, but that he thinks an operation against the Hizmet movement is “a must,” adding that “their big guns [higher-ups] should be prosecuted.” Erdoğan replies, “Anyway, son, don’t go there now, stop.”

Despite the prime ministers words, his son continues, “It is of no use to [only] dismiss or change the positions of police chiefs, prosecutors and so on.” An intro text accompanying the audio claims that Bilal was panicked over the impending possibility of arrest for his involvement in a number of illegal practices.

Several previously leaked phone conversations purportedly between Erdoğan and Bilal implicate them rushing to “zero” money stashed at Bilal and other family members’ homes on the morning of Dec. 17, when a graft scandal erupted. The money allegedly amounted to $1 billion cash in US dollars and euros.

The conversations between the prime minister and his son show a lot of effort on Bilal’s part to get rid of the money. In one of these wiretapped phone calls, Bilal tells his father that they had decided to distribute the money to several businessmen to whom they owe money, effectively liquidating a significant part of it by paying for a number of different projects.

My life changed since I asked two critical questions at a conference held last week in Washington, D.C., with the participation of several pro-government journalists and experts from the Foundation for Political, Economic and Social Research (SETA), a Turkish think tank with close ties to the government. Insults about me, my paper and even the social community I am affiliated with were abundant.