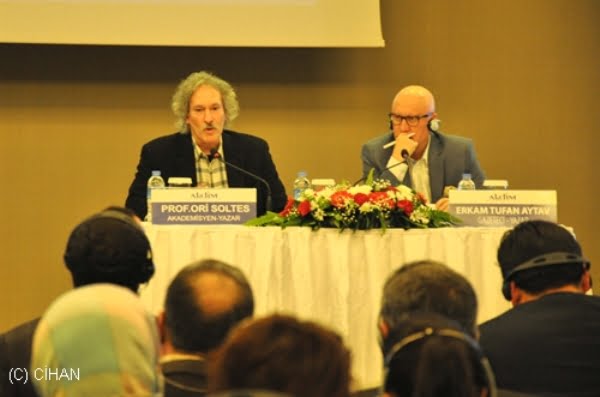 In his presentation, Dr. Soltes underscored Hizmet Movement homes in on selfless action with no expectation in return. “This is what I have seen in every Hizmet person I met. I see the attribute of selflessness in every Gulen-inspired person,” Soltes noted.

Speaking of “parallel state” allegations voiced against Fethullah Gulen and the movement, which, he argues, are based on no solid evidence, “They care for this country and humanity, not their own egos,” Dr. Soltes said. He went on to say, “Gulen is living in Pennsylvania in the first place. And I haven’t seen any sound document or proof regarding the alleged parallel state. Third, this whole thing doesn’t fit together with what I read in Gulen’s books. I can tell the same by looking at the people I met in years. I don’t’ think they have anything to do with parallel state. I don’t even think such a thing exists in Turkey anyway.”

Referring to what’s happening in Turkey’s police department and judiciary as weird, “Similar incidents can take place in many countries having issues with themselves. It’s regrettable.”

“What’s going on in Turkey right now is, in fact, a test for democracy. Whether it’s going to survive or not is being tested, I believe,” Soltes said. Regarding the transition of countries to true democracy, Soltes argued even the US has been trying for 75 years to comply with principles of democracy. “Turkey is on the verge of a critical turning point. Will its democracy be able to get through crisis times? This is what we’re going to see. Yet, we need admit by looking at the past that it’s not so easy to achieve. It’s going to be much easier so long as we recognize how hard it is,” Soltes added.

“Rumi was accused of being a traitor for Mongolia”

The journalist-author Aytav noted that there are parallels between what Gulen –who, he believes, fulfills a critical mission- has been going through and what Rumi did. “Rumi was accused of being a traitor for Mongolia by the people of his time. Gulen shares the same fate. It’s never changed. There are many parallels between Gulen and Rumi, in this regard,” Aytav said.

The Turkish government has embarked on a crackdown of exceptional proportions, targeting people it accuses of being linked to Fethullah Gülen – a Turkish cleric in exile in the US, who the government accuse of masterminding the failed coup on 15 July 2016. More than 10,000 people have been detained since the attempted coup and […]