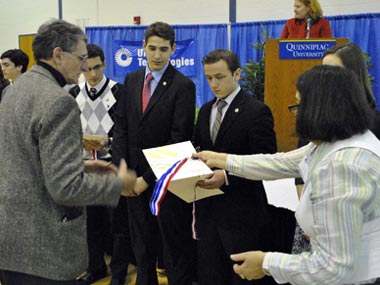 One of the school’s teams, which was composed of students Yusuf Yılmaz, Abdurrahman Cam and Fadıl Sencan, won first place in physical sciences, while the other team — comprising Selahaddin Özkan, Fehmi Ağaoğlu and Özkan Çil — took second place in the life sciences category.

The team that won the physical sciences category will represent the state of Connecticut in the International Sustainable World — Energy, Engineering and Environment Project (ISWEEEP) finals, which is set to take place from May 4-9, 2011, in Houston, Texas. Serik Tukupov also won second place in the mathematics category. PSA, an all-boys international boarding school located in Putnam, Connecticut, took part in the competition with four projects.

The school won a total of seven trophies and nine finalist medals in the prestigious competition. In addition to the trophies and medals, PSA students also won four special awards that included hundreds of dollars in cash awards from sponsors and certificates. “Our students achieved outstanding success with their hard work and raised the bar for upcoming years. I think this is also a good indicator of the dedication of the faculty and the staff of our school, who work in harmony to help these students realize their potential,” PSA Principal Tufan Aydın said about the students’ success.

The students received their awards on March 19 at Quinnipiac University, Hamden, Connecticut. PSA was the only high school to represent northeast Connecticut. The competition also featured middle schools and had two major categories, physical sciences and life sciences, as well as eight special categories. A total of 140 projects out of the 589 projects that were submitted by applicants were accepted for the competition and 133 schools took part in the Connecticut State Science Fair finals.

In his opening remarks at the awards ceremony,Connecticut Governor Dannel P. Malloy congratulated all the participants and emphasized the importance of competitions like the science fair, also mentioning the challenges awaiting young people in the field of science. “We need to celebrate our greatness. These students who put together these projects and conducted the research behind them have been guided by great faculty at our schools and by their families. They are very impressive indeed. They need to understand how important they are. They need to understand that we know they have the capability to build up our state, either in companies that currently exist or in those that are not yet in existence,” he said. Last year, teams from PSA won first and the second place in the physical sciences category in the Connecticut State Science Fair. Before that, PSA teams had won second place awards in2006 and 2008. PSA also made it to ISWEEEP in 2008 and 2010 and won bronze and silver medals, respectively.