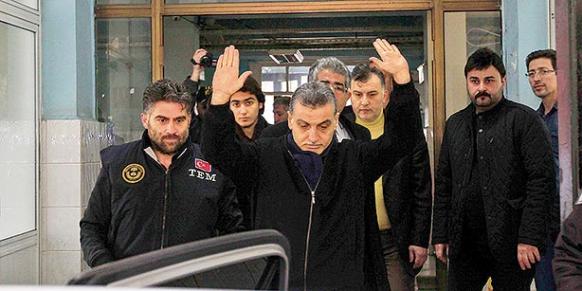 General manager of the Samanyolu Broadcasting Group (STV) Hidayet Karaca was arrested on suspicion of heading a terrorist group based on “evidence” that came from a soap opera script that was broadcast five years ago on STV. (Photo: Today's Zaman)

“What evidence do they [police] have in hand? Is it possible for one person to stage a coup against the government?” Kemal Kılıçdaroğlu, leader of the Republican People’s Party (CHP), asked during an interview on the private broadcaster NTV on Wednesday evening.

Karaca was arrested on suspicion of heading a terrorist group based on “evidence” that came from a soap opera script that was broadcast five years ago on STV.
The CHP leader dismissed the government’s claim that his party supports an alleged “parallel structure” nested in the state and stressed that his party’s attitude is to stand by any citizen who faces unlawful accusations.

In remarks that revealed the CHP leader sees the arrest as a government-orchestrated crackdown aimed at silencing dissenting media, he said: “If there are any weapons involved, let’s call [Karaca] to account [before the law]. … Some of us must side with the victim. They say, ‘You are backing the parallel structure,’ because we stand by the victim.”

“Parallel structure” is a term used by President Recep Tayyip Erdoğan to refer to the Gülen movement, which is inspired by the teachings of Fethullah Gülen, a Turkish Islamic scholar.

Erdoğan launched a battle against the movement, also called Hizmet, following two sweeping graft probes that went public in December 2013 in which four then-Cabinet ministers as well as Erdoğan himself were implicated.

Erdoğan, who was prime minister at the time the graft probes went public, has claimed, without providing any solid evidence, that the prosecutors and high-level police officers who launched the corruption probes are linked with the movement.

“As prime minister, you sent the speaker of your government [Bülent Arınç] there [to the villa where Gülen lives in the US] to ask for his instructions,” Kılıçdaroğlu said.

The CHP leader also made clear that he does not find the government the least bit convincing when it claimed to have been deceived by a “parallel structure” given that the ruling party closely cooperated with the movement until the probes.

“You have an intelligence organization and a police organization. Are you a child? The moment you said you were deceived, you no longer have the right to remain in that seat [of power],” Kılıçdaroğlu said.

“How is it that you only realize you were deceived after your corruption came out?” he further demanded to know, accusing the government of trying to hush up allegations of corruption by portraying the graft probes as an effort to overthrow the government.

Meanwhile, a letter penned by Hidayet Karaca that details the threats faced by the media in Turkey was published on Monday by Le Monde, a leading newspaper in France.

In his letter to Le Monde — a daily with a circulation of 312,000 that receives 64 million visitors to its web site monthly — Karaca said that independent media in Turkey are facing an unprecedented threat.

As part of the Dec. 14 police operation in which Karaca was arrested, Zaman Editor-in-Chief Ekrem Dumanlı was also detained on similar charges, but was released by the court pending trial.

Both STV and the Zaman daily, which has said the government should answer for widespread allegations of corruption, are affiliated with the Gülen movement.