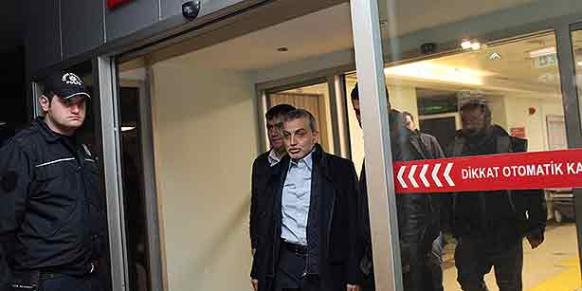 In a briefing with reporters at the Foreign Press Center in Washington, US State Department spokesperson Marie Harf said State Department officials are spending time at meetings conveying their worries to their Turkish counterparts about the freedom of expression and the government’s interventions in the media.

Underlining that the freedom of expression is backsliding in Turkey, Harf said that US official have voiced their concerns on the issue both publicly and in private meetings.

Karaca was detained along with dozens of individuals, including Zaman Editor-in-Chief Ekrem Dumanlı, script writers, producers and directors, on Dec.14 during a government-backed operation against independent media outlets. Although Dumanlı was released pending trial, Karaca was arrested and is being held at Silivri Prison.

While the world is continuing to express its concerns over the Dec. 14 detentions, which have been seen as a blow to press freedom in the country, the Turkish government’s pressure against the critical media continues.

The Turkish Journalists Federation (TGF) Chairman Atilla Sertel claimed on Friday that Justice Minister Bekir Bozdağ denied his request to visit Karaca at Silivri Prison, along with the requests of a number of journalists, and that the minister provided no legitimate reason for doing so.

“Hidayet Karaca is a member of ours. We applied to the Justice Ministry to visit him. The ministry refused the demand. When we asked for the reason, we were told that Mr. Minister doesn’t find it appropriate,” Sertel said.

Sertel stressed that the federation believes that Karaca, a member of TGF, is innocent and he called on Bozdağ to announce the reason behind his refusal to allow Karaca visitors.

The Media Ethics Council (MEK) has also criticized a number of steps taken by the government that further restrict media freedoms in the country.

MEK criticized a decision by the Prime Ministry’s Directorate General of Press and Information (BYEGM) to block 94 veteran journalists from acquiring permanent press cards, regardless of their eligibility.

In a statement released on Friday, MEK President Cemalettin Haşimi called the decision a “violation of rights and arbitrary treatment.”

“Not giving press cards to 94 journalists who are entitled to them, through the decision of the Press Card Council, is discrimination. The tragic part of this issue is that this discrimination is being carried out by a press institution,” it is said in its statement. It also highlighted warnings from international institutions about diminishing press freedoms in Turkey.

BYEGM made a highly controversial decision to block a number of journalists — many of whom work for the Zaman, Samanyolu, Cihan, Taraf and Bugün media outlets, which are critical of the government — from acquiring permanent press cards during a meeting held last December. In spite of authorizing the issuance of press cards for 208 new applicants, the directorate declined to award cards to a number of journalists applying to extend the validity of cards already in their possession.

MEK also condemned a Turkish Airlines (THY) decision not to distribute the Cumhuriyet daily to its passengers, saying the act is “another example of discrimination” when it comes to the Turkish media. MEK said that every kind of attempt to silence the media damages the international image of the country.

“We once more reiterate that we deny every kind of discrimination. We strongly condemn pressure, intimidation and threats [being used] to prevent media freedom,” MEK said.

In his remarks on a TV program on Thursday evening, Renzi criticized Turkish Prime Minister Ahmet Davutoğlu’s attendance at a march in Paris paying tribute to the victims of terrorist attacks last week.

“There are dilemmas in many countries. For example, Turkish President Recep Tayyip Erdoğan decided to detain some journalists in December and to close some press institutions. This is [clearly a] press freedom problem. But you [Davutoğlu] are there to defend press freedom. … I mean this seems absurd,” he reportedly said.