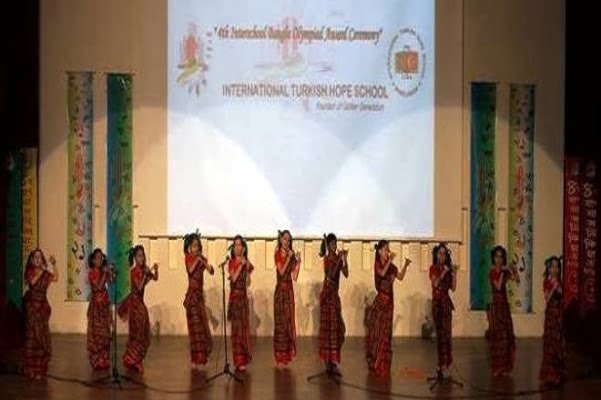 The event kicked off with national anthems followed by the Bangladeshi students’ poem, song performances and art exhibitions. The students later sang choral songs in memory of Bengali Language Movement members who fell dead on Feb. 22 because of 1952 incidents.

Bedrettin Suata, principal of International Turkish Hope Schools, in his address, pointed to the importance the Bangladehis attach to their language. He further said, “This is our forth Bengali Olympics, as Turkish Schools. We hold this event as a courtesy to the Bangladeshi people who fought for recognition of their language in 1952 and to be able to relate to your feelings and thoughts.” Next, Fikret Cicek, chairman of Turkey-Bangladesh Chamber of Commerce, delivered his speech in the event.

The students, including Turkish nationals, as well hyped up the audience with their song and dance performances. A Turkish teacher, Fatih Aksoy, sang a song in Bengali.

Mostafizur Rahman Fizar, the minister of education, presented awards to the winners and posed to the cameras with the schools’ officials. The event came to a close with the students’ dance performances.