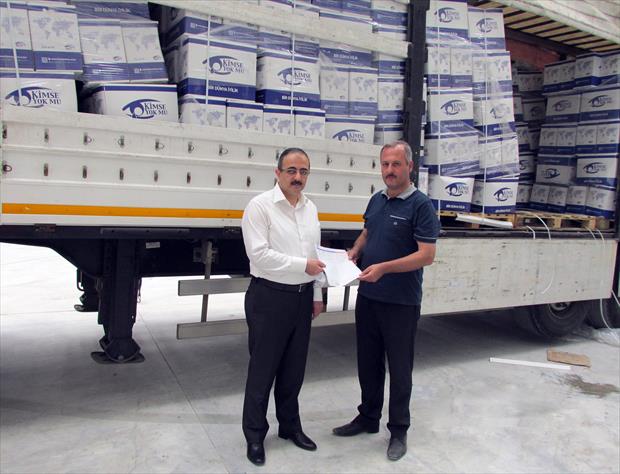 Having already donated 2-truck load of food back in June, the foundation kept on its aid efforts for the Turkmen sufferers. The chapter director Erol Elkoca reported that they provided 250 tents and five thousand blankets in total. In addition to the Turkmens, they have been helping the Ezidis seeking refuge in Turkey with food and clothing. “Our foundation will carry on helping the needy, regardless of their language, faith or ethnicity. We took action for the Ezidis fleeing the tragedy in Iraq and seeking refuge in Turkey. The clothing donations, besides the food, have already been given away. We had also delivered a truckload of clothing aid to AFAD Erzurum Provincial Office to be given away to the Turkmens shortly before the Eid al-Fitr. And today’s donation is on its way for the Turkmens in refugee camps under Dohok Governor’s Office, making the amount of assistance we have provided to date 4-truck load.”

Elkoca went on to say their aid efforts for the Turkmens and Ezidis will continue for days to come. “We will carry on assisting those in need in our city and neighboring area. We are set to give away clothing and food aid to the needy ahead of the Eid al-Adha. And as a part of the eid, we’ll be proving meat to 10 thousand families. Just like before, our volunteers will be visiting the needy from door to door in order to greet the eid and deliver the donations.”

TODAY’S ZAMAN, İSTANBUL Tajik President Emomali Rahmon called on Turkish businessmen on Monday to take advantage of Tajikistan’s rich mining resources and to increase economic relations between the two countries. Speaking to participants at the Tajik-Turkish Business Forum organized by the Turkish Confederation of Businessmen and Industrialists (TUSKON) in Konya, Rahmon said his country’s economic […]