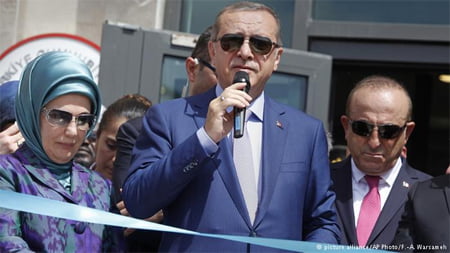 According to a statement issued yesterday in Abuja by the CEO, Impact Innovators Limited, Mr. Sebagen Henry Noboh, he had established a decoy foundation to achieve his aim.

The NGO, Maarif Foundation, could not secure financial support from local Turkish businessmen, forcing the government to turn to gulf countries for funding.

It would be recalled that Turkish government made vigorous efforts to make other countries close Hizmet Movement-affiliated schools on the unsupported claims that the movement orchestrated the July 15 failed attempt to topple it.

The statement said on September 14, the Minister of Education in Turkey, Ismet Yilmaz, announced that Maarif Foundation was planning to take over 65 schools linked with Hizmet Movement in 15 unnamed countries.

It added that the Head of the Civil Society Action Coalition on Education For All (CSACEFA), the umbrella body of over 600 education civil society organisations, MrS Chioma Osuji, said the move would fail in Africa.

She said: “How is that possible; an NGO taking over private investments with the aid of the government? That’s not possible. They can’t just wake up one day and take over the schools. That would be terrible.

“This is Africa. We won’t allow any foreign country to treat us like one banana continent. I don’t really see any country in Africa buying that; certainly not Nigeria. It would be met with stiff opposition.”

CSACEFA was formed in the run-up to the World Education Summit in Dakar, capital of Senegal, in 2000 by 40 education NGOs in Africa.

According to her, Hizmet Movement schools, otherwise known as Turkish schools, contributes to the development of education in Nigeria and other African countries.

She, therefore, urged African governments to resist any plot by the Turkish government to undermine its sovereignty and respectability by accepting its disguised order to hand over the Turkish schools to Maarif Foundation.

“Despite tremendous efforts exerted by the government, only a few countries have given in to pressure from Ankara over the shutdown of Hizmet-linked schools, with a majority of them refusing to meet the demands of the Turkish government.”