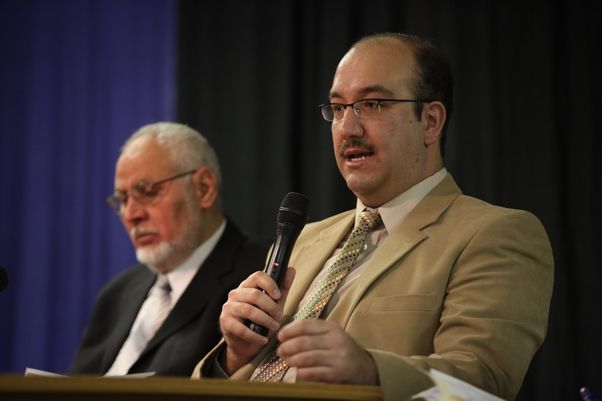 Dr. Mustafa Gokcek usually plans a summer trip to Turkey for his students at Niagara University. In October, following increasing tension in the country, Gokcek decided to cancel it this year.

That proved to be the right call.

On July 15 – the day after the terrorist attack in Nice, France – Turkish soldiers attempted to overthrow the government. Soldiers blocked access to strategic roadways, including the Bosphorus Bridge, and Istanbul’s Ataturk Airport. The coup failed in a matter of hours, but nearly 300 people were left dead, and another 1,500 were injured.

Gokcek, a history professor who studies Turkey, was in Istanbul the night of the coup. A Turkish citizen, Gokcek, his wife and his kids were visiting the country to see family members still living there.

He described his experience during an address Saturday afternoon in Buffalo’s Turkish Cultural Center. Most attending had roots in Turkey, whether they were born there or their ancestors emigrated in the 1920s.

The dramatic events stirred passion, fear and many questions among those in the audience.

Gokcek picked up his brother-in-law up from the Istanbul airport the night of the coup, and as they were heading home, they noticed a traffic irregularity on the Bosphorus Bridge. The two men first thought there was an accident and then began wondering if there had been another terrorist attack, such as the one last month at Ataturk Airport.

When they arrived home, they turned on the TV and saw their first images of the coup, with soldiers blocking access to the bridge.

Gokcek put these events in context with prior Turkish coups of 1960, 1971 and 1980. The previous coups unfolded in the early morning as the country slept.

“The saying is, ‘Have you seen the coup?’ ” Gokcek said. “I woke up, and the military took over.”

“This time, we were seeing our own coup.”

The coup began late Friday night, and within a few hours, Turkish President Recep Tayyip Erdogan said Fethullah Gulen, a Turkish cleric self-exiled in Pennsylvania for the past two decades, was responsible.

Erdogan encouraged people to protest in support of democracy. Gokcek and his father went out and saw thousands of people on the streets, many waving Turkish flags.

By the next day, Erdogan’s government had regained control of the country.

But the coup’s aftermath has been the most alarming part of the ordeal for many Turkish-Americans – of whom there are about 1,000 in the Buffalo area. In the week after the coup attempt, the Turkish government fired and detained thousands of judges, teachers and government officials suspected of being coup allies and supporters of Gulen.

Gokcek, his wife and his kids had planned to stay in Turkey into mid-August, but because of the events, they took a flight back Tuesday.

The night of the coup, Gokcek, Turkish citizens and Turkish-Americans were united in celebration that the democracy had survived. But afterward, questions lingered, including who was behind the coup.

Gokcek said he is not optimistic. He is fearful about the growing tensions in the country and coup sympathizers who might be stigmatized as traitors.

Tevfik Kosar, a computer science professor at the University at Buffalo, came to the United States 18 years ago and has lived in Buffalo for five years. Most of his family also remains in Turkey.

Kosar and others worry Turkish citizens are only receiving government media reports about the coup.

“We are lucky in one sense that we are able to get free information and interpret what’s going on,” Kosar said. “They only have government sources, so they don’t hear that news and can’t talk about it.”

And Turkish-Americans fear they might feel a chill in their own communities.

On a basic level, Gokcek said, he has been able to sit down and eat with other Turkish-Americans with whom he might not always agree.

“Some of those friends, I might not be able to now,” he said.