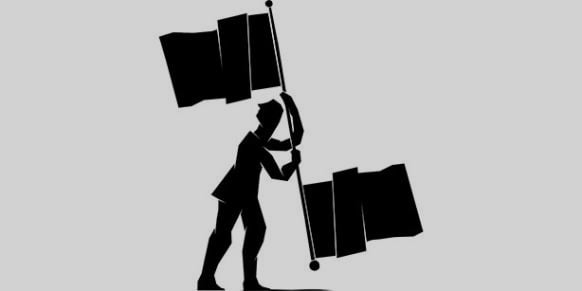 by Haluk A. Savaş*

This piece reviews the political and social position of a community referred to as the Hizmet movement — which has been involved in social service since the 1970s as a social movement, both before and after the local elections on March 30, 2014 — the processes it was involved in, as well as the outcomes of all this.

Rather than a scientific and academic review, this piece can be taken as personal notes of an observer who relies on scientific perspectives.

A. How did Erdoğan respond to what was happening in Turkey before March 30 and what propaganda methods did he employ?
The prime minister and the Justice and Development Party (AKP) were feeling guilty because of the Dec. 17 and Dec. 25 corruption investigations. To get over this feeling, they relied on a method of denial. Evidence suggested that there were serious crimes committed by an organized clandestine gang. The government perceived this investigation into the gang as a threat and in an attempt to deal with this, instead of relying on legal means they reassigned many police officers, judges and prosecutors. Through this move:

This message was effectively disseminated to the people via the media it controls.

B. Reasons for the success of the anti-Hizmet campaign

B-1. Conceptualizations used against the Hizmet movement

Erdoğan has rejected the evidence of corruption that has been substantiated or he has presented this proof as being part of a conspiracy. He promoted the idea that Israel and the US were external components of this conspiracy and that the Hizmet movement was the domestic component. Propaganda centers have worked to this end. Certain propaganda items were developed and these items were published by different media organs. In this way, certain messages were circulated. The most influential and useful of these concepts and labels was the “parallel state or structure.” This was pretty influential because this term implied that the Hizmet movement created a separate structure within the state. It was a useful concept for the middle class as well. On the other hand, terms like “Hashshashin” (a medieval order of assassins) were useful for influencing undereducated circles. These terms were promoted to disseminate hatred among undereducated segments of society and for further polarization.

The image of the movement

B-2. Previous image of the Hizmet movement in society

These labels and concepts had an effect in some societal circles; the image of the Hizmet movement was affected by these allegations because it was previously perceived as an educated and elite organization, an independent movement acting autonomously of all social and political organizations, a Masonic organization despite its many allies and a secret group.

C. Erdoğan as a man of the people and Hizmet movement as an elitist group

Most of the people in Turkey are religious; however, a religious lifestyle does not necessarily mean that religious duties are performed meticulously. Instead, religion was mostly perceived as a reflex to protect the society against change. Changes in this are seen as attacks against national and religious values and as effort toward Westernization.

In some religious orders,  some people who previously consumed alcohol and drugs became religious  and moved away from their previous lifestyle. In other words, there are religious groups where even Muslims who were once addicts or criminals are members. It would not be an exaggeration to argue that religiosity involves some uneducated groups as well. Given that the average amount of education in Turkey is six years, it can be concluded that only a small portion of religious people are educated and practice their religion in a very informed fashion.

In sum, Turkish society is undereducated, nationalistic and religious. The Hizmet movement has been active in the social sphere; however, its activities are intensified in the field of education. It is an “elitist” movement in a way, in that it pays attention to smart kids who promise a bright future.

On the other hand, we all know that ever since he entered politics, Erdoğan has presented himself as a former soccer player and a former municipal worker who suffered from poverty. Erdoğan has used this discourse as part of his propaganda. Most recently (on May 12, 2014), he said, “My mom used to send me to Okmeydanı Hospital to get an appointment [for her] for a regular medical exam.” With this remark, he delivered the message that he is a prime minister who previously suffered a lot from poverty, who served his mother and who has done a great deal in the field of health by improving conditions in this area.
He constantly delivers populist messages to lower level socio-economic groups. On the other hand, the Hizmet movement provides educational services in urban areas through private study houses and schools and offers scholarships and fellowships for college students. In this sense, it remains a movement that gives the impression that it is an elitist movement.

Since he came to power, Erdoğan has remained decisive in dealing with the educated groups rather than the rich segments of the society. He has relied on language in which he insults educated people all of the time. He elevated the tension in his discourse after Dec. 17, and he insulted a prosecutor (Muharrem Akkaş) and a professor (Mümtazer Türköne). The prime minister relies on a style in which he tries to devalue the educated people. It is interesting to note that in a meeting where the status of associate and full professors in some hospitals was being discussed, he said: “So what? We can call any doctors an assistant professor.” It is also interesting to note that during Erdoğan’s rule university professors have received a relatively smaller raises compared to other public officers. This preference was justified by saying that a balance was being stuck. Erdoğan also pursued a policy in which the independent professions of educated professionals were taken away from them. Instead of independent pharmacies, he developed a model where pharmacies would be part of a chain of markets to be owned by holders of large capital. Under this system, pharmacists would work as employees. This model was not implemented after strong criticism from the pharmacists.

Likewise, instead of independent law offices, the prime minster has been working on a system where international law firms would become dominant and lawyers would become workers in these firms. The system has not yet been implemented. However, it was covered in the media. Laws were made to ensure that medical doctors would not work in their private offices; however, these laws were struck down by the Constitutional Court. The constitutional right to operate a private office was violated to create an advantage for private hospitals. The right of medical doctors who work at medical schools to run a private office was breached. The restrictions in this particular area violated the right to work guaranteed in the Constitution.

The prime minister developed methods to target pharmacists, medical doctors and the lawyers, tried to restrict their ability to work independently and transformed their field into an area where his relatives and international capital holders would make a large sum of profit. He still tries to achieve his goals in this respect. Privatized hospitals, regulations enabling the employment of public officers in these hospitals, and projects to create “chain pharmacies” for Ethem Sancak — who owns pharmacy depots — have been covered by the media. Attempts to allow pharmacy sections in markets like BİM and the legal regulations on this matter were also discussed.

On the other hand, all of these policies and efforts that allow big capital holders to employ medical doctors at a lower cost and restrict the ability and rights of educated groups to work independently were proudly presented as being practices and policies that would work for the good of the poor. However, this populist propaganda does not tell the truth about what is going on. Through these practice and policies, independent professions are being eliminated and new areas are being created for capital holders. And this is presented as something that is being done for the people.

After the Dec. 17-25 investigations, the prime minister attempted to deal with the judges, prosecutors and security officers involved. He relied on mobbing practices by reappointing them. Through this move, Erdoğan took his struggle against educated groups to another level. There is now a prime minister who is dealing with the military officers, some of whom were described as coup makers in the Balyoz case (some of the suspects were actually coup makers as evidenced by the court judgments), with the judges and prosecutors, the security officers, the medical doctors and other educated groups, including the lawyers and pharmacists. The impression that Erdoğan is dealing with these educated groups who are relatively doing better in their daily lives in economic terms and who were considered the elites of the past has transformed the prime minister’s image into that of a hero who is promoting the interests of the people and who is struggling with the elites in the name of the poor and underdeveloped people. These practices have made him a heroic figure who remains resolute and determined to carry out his fight. Even though he relies on strong statements and perhaps illegal methods, Erdoğan remains a hero in the eyes of the people because he always wins. As a result, he appears to be a figure who should be emulated.

*Haluk Savaş is a professor of psychiatry and the editor-in-chief  of the Journal of Mood Disorders.