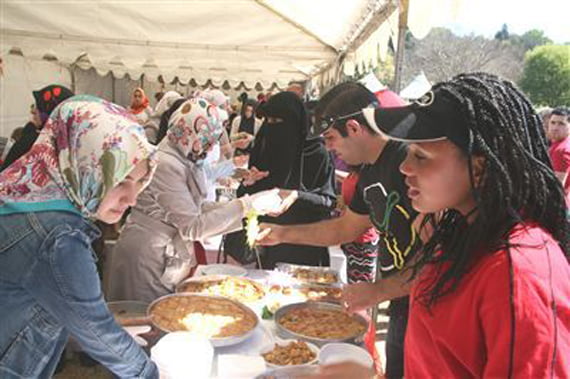 Thousands of people have attended the fourth Turkish Culture and Food Festival at the Zoo Lake, a popular lake and public park in Johannesburg.

“I feel like am in Turkey today,” Janet Lerato, one of the festival attendees, told the Anadolu Agency.

The Mehter band excited many at the festival as it played traditional military songs.

For centuries, the Mehter Band performance had accompanied the marching Ottoman army into battle.

Lerato said the festival has inspired her, adding that she was already thinking about taking a holiday trip to Turkey.

The annual gala’s organizing committee was headed by the South African-Turkish Business Association (SATBA) and supported by other organizations established by Turkish nationals in South Africa.

Students from Turkish-owned schools in South Africa performed Turkish folk dances to the amazement of the audience.

“I couldn’t imagine that black South African students can sing and dance like the Turkish people,” Rosemary Nomfundo, one the spectators, told the AA during the festival.

“This is so interesting.”

The family-friendly carnival offered facilities for children to play and ride on horses while the adults checked exhibitions by authentic Turkish artists, stage performers and food stalls.

There were long queues particularly at stands selling Turkish cuisine.

“This is the first time I taste Turkish food and it tastes so nice,” Omar Okocha, a Nigerian national living in South Africa, told the AA.

He said he stood for over 25 minutes in the queue just to buy and taste the shish Kebabs.

Serkan Ergul, the festival coordinator, said thousands of people have visited the festival until midday Sunday.

Professor Whyte, who is a constitutional jurist and a former advisor to state ministers, spoke on the Hizmet’s activities in his country. He believes the movement is seeking a peaceful world. “Hizmet is a movement that wholeheartedly believes in intercultural dialog, which is the key for peaceful relations among people.