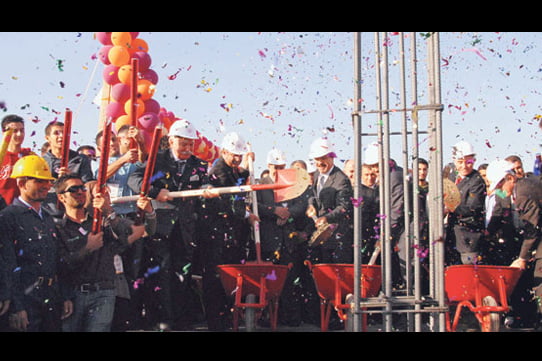 A groundbreaking ceremony was held for the construction of a campus for Işık University, which is affiliated with the renowned Fezalar Educational Institute

Dlawer Abdul-Aziz Ala’Aldeen, minister of higher education of the Kurdish Regional Administration in northern Iraq, has expressed appreciation for Turkish schools in the region, explaining that they have helped improve economic, trade and political relations between Turks and the region.

Speaking at the opening ceremony, Ala’Aldeen said, “It is an honor to be here with a distinguished crowd like this to take part in the groundbreaking ceremony of an international and valuable university.” He expressed appreciation to the administration and teachers of the Fezalar Educational Institute for their years of service in the country and region. “The administrators of Işık University have made investments in the region and proven that they provide services to the people of this country like the people of this country would. Therefore, I would like to tell them you are not guests here. You are citizens of this country and we will live in this region together for many more years to come,” he said.

‘We look forward to its contributions to educational reform’

Noting that they value Turkish schools in terms of their contribution to politics, the economy and society, Minister Ala’Aldeen said the Turkish schools serve as a bridge between Turks and locals. He explained that the administration has plans to implement major reform in education and said, “Işık University can assume a very valuable and important role in this reform.”

Arbil Deputy Governor Abdullah, who spoke during the ceremony, said students who receive an education from Turkish schools and study at this university will guarantee progress in the region and Iraq. Expressing his happiness for being present at the groundbreaking ceremony, Abdullah said: “The continued service of these universities in raising good generations means our country will have a good future. The attendance of educated and wise students to this university will be an assurance to our country. The Turkish schools instill values in their students and gave our universities and our people the brightest youth. The schools have done a great service. We express our appreciation and gratitude to the schools’ officials.”

Işık University Rector Professor Akar then spoke. “Only people equipped with knowledge of positive sciences and superior morals can bring peace and happiness to the region, to Iraq and to the world, for that matter,” he said. He noted that the university will serve as the final link of the Fezalar Educational Institute, whose only mission is to raise excellent people starting from kindergarten. Explaining that the future of the country depends on a youth that has received a good education and has strong morals, Akar said: “It is certain that progress cannot be attained without knowledge. But knowledge cannot be used appropriately without moral values. Knowledge will render what it is expected to render only when it is used for the benefit of mankind.”

Akar stated that without people who uphold supreme moral values and have a knowledge in the positive sciences, meaningless wars happening around the world that kill thousands of people, including women, children and the elderly, innocent people and civilians will not end.