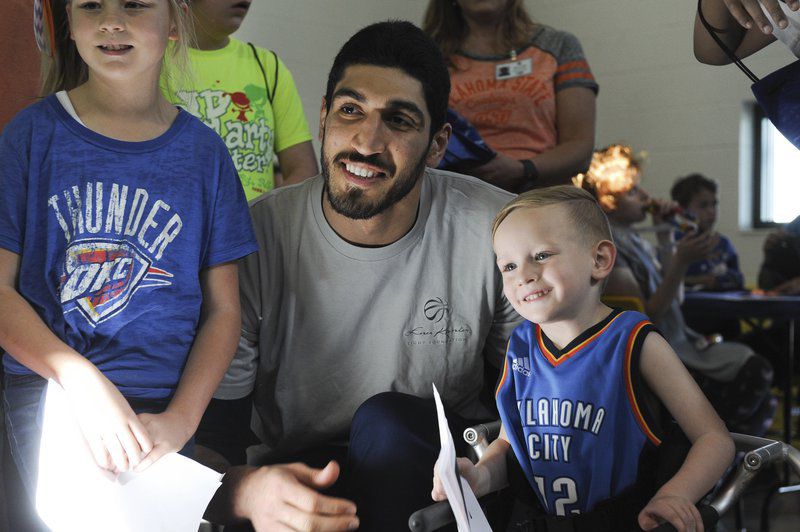 OKC Thunder's Enes Kanter takes a picture with Henry Hale during his visit at the J.D. MacCarty Center Thursday, March 23, 2017

Facing his father’s arrest, interrogation, potential imprisonment and much worse, Oklahoma City Thunder center Enes Kanter remained resolute Friday in his commitment to using his position as an NBA player to expose corruption in his home country of Turkey to a wider audience.

“There [are] thousands of people out there, like kids, wives, women, pregnant women, young ladies, there are all these people out there in jail,” Kanter said on a conference call Friday afternoon. “My dad is just one. I play in the NBA, so people know my story, but I want the whole world to know what’s really going on in Turkey.”

Kanter learned Friday morning that his father, Mehmet, had been arrested in Turkey. It was the most recent attempt by the Turkish government to force Kanter to stop his criticism of the country and its president, Recep Tayyip Erdoğan.

Kanter supports Fethullah Gülen, the founder of the religious and political Gülen movement, one that calls for a reform of Turkish society toward one that embraces Islam, but also one that accepts the West and believes in interfaith dialogue.

Turkey’s ability to stop Kanter from living in the U.S. or playing in the NBA is basically non-existent. The U.S. won’t allow Turkey to extradite him. But Erdoğan’s government has an ulterior motive in attempting to intimidate Kanter. “The point is not so much to attack Kanter. The point of this exercise is to let Turks around the world know that none of them are safe, that they should not speak out against the government,”Joshua Landis, director of OU’s Center of Middle East Studies, said.

Erdoğan blamed Gülen for a failed coup last July. After the coup, hundreds of thousands of Turks have been arrested and tens of thousands more have been internally displaced. Erdoğan has consolidated power, shuttered the press and worked to silence critics abroad. Kanter has repeatedly called him a “very, very bad man” and “the Hitler of our generation.”

But while organizations like Amnesty International have published detailed reports of Erdoğan’s human rights violations, Turkey is a key member of NATO that works as a bulwark for Europe against a flow of immigrants from war-torn Syria and sits in a key geographic position on Russia’s southern flank. The country is vitally important as a staging ground for America’s war against ISIS.

“Geo-strategically, Turkey is in a very important position for the security of Europe, primarily, but also the U.S., should any European country face a security issue,” said Professor Louis Furmanski, chair of the political science department at the University of Central Oklahoma. “Turkey is key. They’ve negotiated an agreement with Europe to prevent migrants from crossing the Aegean Sea into Greece, helping stem the flow of immigrants to Europe. So the U.S. and Europe have been treating Erdoğan’s government with kid gloves.”

Turkey was once close to the U.S., but sharp disagreements over how to handle the Syrian civil war and combat the rise of ISIS have led to friction between America and one of its most prized allies. When Erdoğan initially took power, he was friendly toward Syrian President Bashar al-Assad.

The U.S. leaned heavily on Turkey to break with Assad and allow insurgent fighters to cross through Turkey into Syria to battle the dictator. Some of those insurgents fueled the rise of the Islamic State, which the U.S. is now attempting to fight by training and arming Kurdish resistance fighters.

But the Turks are already in conflict with an insurgency of Kurdish resistance fighters, known as the PKK, pushing for the creation of a separate, Kurdish state. The PKK is considered a terrorist group by the Turks. America is arming them south of Turkey’s border, which means to many in power in Turkey that it’s only a matter of time before those Kurds join the PKK. And, the man the government blames for the failed coup, Gülen, is being sheltered by the U.S.

“The U.S., very rapidly after the uprising in Syria, said that Assad had to step aside and began to organize the international community to oppose Assad and find an alternative government,” said Joshua Landis, director of OU’s Center of Middle East Studies. “Turkey fell into these plans with America, which has led to the expansion of civil war in Syria, the arming of Syrian opposition by U.S., Turkey and gulf Arab states and the outflow of millions of Syrians into Turkey.”

For the most part, countries like the United States, the UK and Germany have rejected offering asylum to large numbers of Syrian refugees, which has continued to strain relations between Turkey and the West.

“The West doesn’t want any of these people; they’re not going to help share the burden, even though we should,” Landis said. “We left Turkey holding the bag, and when Turkey opened the door to let them go to places like Germany, all of Europe screamed bloody murder.

“Now, America is arming the Kurds to kill ISIS, but the Turks are convinced these arms will travel across the Syrian border into Turkey.”

Turkey’s ability to stop Kanter from living in the U.S. or playing in the NBA is basically non-existent. With federal representatives from Oklahoma lobbying in his favor, odds are the U.S. will expedite documents for the Turkish national to make it easier for him to travel. The U.S. won’t allow Turkey to extradite him. But Erdoğan’s government has an ulterior motive in attempting to intimidate Kanter.

“The point is not so much to attack Kanter. The point of this exercise is to let Turks around the world know that none of them are safe, that they should not speak out against the government,” Landis said. “This entire incident comes in the immediate aftermath of Erdogan’s disastrous visit to Washington, D.C., where there were demonstrations by a number of Turkish-Americans.

“He had his detail beat them up fairly severely, and Erdoğan accused the U.S. government of failing in its efforts to protect him, that America should have gotten rid of those people a long time ago. That’s indicative of the way he and Turkey has been moving — increasingly it’s becoming a dictatorship.”

Historically, this isn’t the first time that athletes and their families have become embroiled in political conflict. But the arrest of a prominent athlete’s father is fairly unique, said Dr. Robert Rodriguez, an assistant professor at Texas A&M University-Commerce who teaches classes on the intersection of sport and politics.

“While there are many athletes throughout history who have been critical of their government, regime or leaders, you would be hard pressed to find an example of an athlete’s father being imprisoned, his passport being revoked, having an arrest warrant bearing his name and being labeled a terrorist,” Rodriguez said. “The most similar parallel would be that of Cuban baseball players and boxers who are exiled for life if they defect to seek riches for plying their trade in the West.”

Kanter’s parents publicly disowned him last summer, which he says was to protect themselves from government retribution for his criticism. But if Kanter’s family had to disown him in an attempt to keep themselves off the government’s radar, why did they not emigrate to the United States to avoid imprisonment and other repercussions?

Add the current animosity toward Muslims from many Americans and the U.S. isn’t quite as appealing a destination as one might instinctively assume. Kanter said his hope is that one day his family will join him in America, but that hasn’t happened yet.

“Why would they want to come to a country that doesn’t want them? That’s not a natural move,” Landis said. “It might be something they’re forced to do. I’m sure Enes is thinking about it. But Turkey isn’t a country that people are going to give up on easily, if they’re born and raised there.”