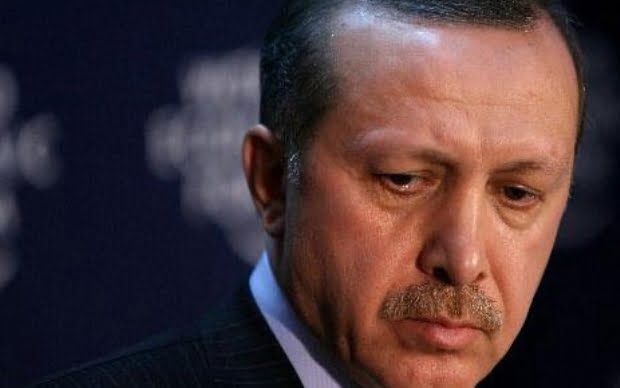 Prime Minister Recep Tayyip Erdoğan acknowledged calling an executive of a mainstream news channel while on an official visit to Morocco in June to discuss its coverage of comments by an opposition leader, but said he only did so to draw attention to the fact that he was being insulted.

The prime minister confirmed his call to the Habertürk executive at a press conference along with his Spanish counterpart, Mariano Rajoy, in Ankara on Tuesday.

His remarks came after Today’s Zaman journalist Ahmet Dönmez asked a number of questions concerning Erdoğan’s meddling with the media, the construction of a number of villas which allegedly belong to the Erdoğan family in a first-degree environmentally protected zone in Urla, İzmir province, and the purchase of a media outlet through the collection of bribes.

Enraged by the questions, Erdoğan rejected any role in the construction of the villas on public land in Urla and said there is an ongoing trial concerning the issue. He strongly rejected any wrongdoing while claiming that he has no link to the case as the villas had been constructed 35 years ago.

“That land belongs to one of my good friends and it is not on public property. First and foremost, I want you to know this fact. I have only gone there along with my family on a brief vacation lasting three to five days a year over the past five years,” Erdoğan said, dismissing the accusations that he called for a change in the status of the area from a first-degree environmentally protected zone to a third-degree environmentally protected zone to allow the construction of the villas.

Appearing tense and stunned by the questions, Erdoğan took a swipe at the reporter, who received a hero’s welcome on social media for his questions at a time when practicing the basic components of journalism — asking questions — poses a tremendous risk for journalists in Turkey.

In voice recording uploaded to YouTube last week, Erdoğan is heard giving phone instructions to Fatih Saraç, the vice president of the Ciner Media Group, to which the Habertürk news channel belongs, to stop a news ticker in which Nationalist Movement Party (MHP) leader Devlet Bahçeli called on President Abdullah Gül to intervene and decrease the tension during the Gezi Park protests, which rocked the country at the beginning of last summer.

“This is very surprising… There is no need for such things [to be displayed on television],” Erdoğan told Saraç on June 4, 2013, while on an official visit to Morocco. According to the voice recording, Saraç responded to Erdoğan, who was apparently vexed by the MHP leader’s comment that the president should intervene, thereby sidelining the prime minister. “I will deal with it immediately, sir,” he said.

The voice recordings, made public Tuesday night, seemed to show that Erdoğan was closely following, even while abroad, what the Turkish media disclosed to the public. The voice recording of Erdoğan, in which the prime minister allegedly instructed, while the Gezi Park protests were at their peak, the senior official of a television channel to immediately stop running the news ticker that did not appeal to him, has amply demonstrated how far the prime minister goes in his efforts to control the media.

When asked about the phone conversation, Erdoğan acknowledged that he had called the Habertürk executive. “I was being insulted,” said Erdoğan in an effort to justify his call.