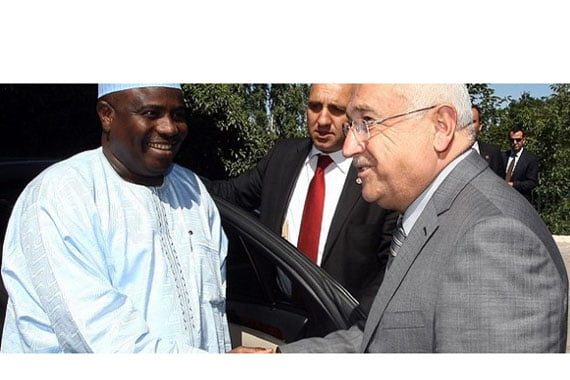 İREM KARAKAYA, ANKARA
Recent attacks in Nigeria, apparently targeting the country’s Muslim population, have raised concerns in Turkey about the plight of Muslims in the war-torn African country, although the likelihood of an attack on the Turkish community in Nigeria doesn’t appear high at present.

The Turkish Foreign Ministry released a written statement on Sunday which condemned attacks on a mosque and nearby village that killed more than 60 people. Two months ago it also warned Nigeria’s Turkish citizens of the risks of traveling to southern Nigeria. According to the Nigerian Embassy’s data, Nigeria hosts around 300 Turkish tourists every month.

In the statement, the Foreign Ministry, while condemning the terrorist attacks aimed at Nigeria’s security and unity, expressed “deep sadness” over these incidents that risk becoming a religious conflict.

Diplomatic sources, speaking on condition of anonymity, said that they don’t perceive a threat to Turkish citizens because the Turkish population, living mainly around the capital of Nigeria, Abuja, is not significant in southern Nigeria, the region where Boko Haram concentrates its attacks.

“The attacks generally occur in the southern part of the country, and Turkish citizens mainly live in the trading cities around Abuja. So there isn’t likely to be an attack on Turkish people. The Turkish government warned its citizens and the Nigerian government declared a state of emergency in the provinces where the attacks took place,” the source told Today’s Zaman.

The last in a series of attacks occurred on Sunday in Konduga town, killing 44 people praying at a mosque. Konduga town is in northeastern Nigeria, a predominantly Muslim area, and is 35 kilometers (22 miles) outside Maiduguri, the capital of Borno state. Another 12 civilians died in a simultaneous attack in Ngom village, near Konduga. Boko Haram, releasing a video after the attacks, claimed responsibility for the bloody incidents and challenged the US, saying that their organization is powerful enough to fight the Americans.

When 18 Turkish schools, one university and 30 Turkish companies have been taken into account, an attack on the Turkish presence may be possible, as the name of Boko Haram means “Western education is sinful,” and the organization forbids its members to live prosperously.

“If there is an act of violence against Turkish people, that act may happen over the issue of education as the organization is against Western-style education,” diplomatic sources maintained and added: “However, high security measures have been taken to protect these schools.”

Around 3,500 students are educated in more than 10 Turkish schools, including primary schools, high schools and one Turkish university, which are found in seven states of the country. Boko Haram began its fight against missionary activities in Nigerian education, as it saw them as a remnant of the country’s colonial past. However, it was transformed into a terrorist organization and increased its violent activities after 2005.

The terrorists also attacked a primary school in Yobe state, in the northern part of the country, killing 40 students on July 9.

Boko Haram, which separated into branches and is seen as the greatest security threat in the country, is also known for abducting Western people and killing them in the style of al-Qaeda. It also kidnapped a French family of seven (including four children) in Cameroon on Feb. 19, 2013, and then transported them to Nigeria.

Hasan Öztürk, an Africa expert at Turkish think tank the Wise Men Center for Strategic Studies (BİLGESAM), agrees that attacks won’t be directed at Turks at the moment. However, Öztürk doesn’t ignore the possibility that Turks in the West African country could also be victims of these terrorist attacks in the future.

According to the commentator, Turkish investors growing wealthy through contracts they won in the country could become targets for the terrorist group, which forbids its members to live prosperously.

“There is a considerable Turkish population in Nigeria. And Turkish people have relations with the Nigerian elite, who send their children to Turkish schools. When the rise of large scale investments from Turkish companies and the affiliation of Turkish schools with wealthy Nigerians are considered, we can say there is a security risk for Turkish people in Nigeria,” he told Today’s Zaman.

Turkish businessmen make use of Nigeria’s large population, which is more than 162 million, and make many investments in the country. According to the Turkish Foreign Ministry’s information, 30 Turkish companies are engaged in the fields of construction, manufacturing and energy in Nigeria.

In a video released by Boko Haram after the attacks, their leader Abubakar Shekau says their aim is to establish an Islamic state. It is already known that the radical group wants to oust the government and impose Islamic law. The reason why the radical Boko Haram group attacked a mosque remains unknown. In the past they have attacked Christians, teachers, schoolchildren and military targets. Boko Haram is also believed to be behind the simultaneous church attacks in several provinces of Nigeria in 2011.

Öztürk believes the terrorist group is supported by external forces, so its future acts are hard to predict. Therefore, there might be no consistent purpose behind the attacks.

“The organization [Boko Haram] has been used as a tool by foreign powers. A national organization cannot obtain such heavy weapons without contacting an international terrorist group. It is backed by other states, so there is no need to look for a special reason behind the attacks,” he noted and added: “Boko Haram’s latest attack on a mosque is not an ideological one, but a terrorist activity.”

Turkish diplomatic sources also stressed that Boko Haram is not an organization which can organize terrorist activities on its own. It is believed that Iran is behind the acts of violence in the country, as a group of independent arms-trafficking researchers found Iranian bullets throughout Africa this year, after six years of research on ammunition.

The militants have been blamed for the deaths of more than 1,700 people in their attacks since 2010.