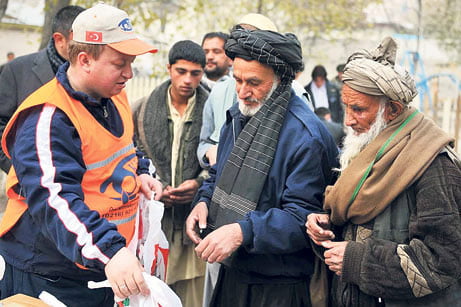 Turkish charity groups are putting the final touches on preparations to help the less fortunate both in Turkey and across the globe during the Islamic holiday of Eid al-Adha (Feast of the Sacrifice), which begins on Nov. 6.

It is that time of year again in Turkey, as aid organizations such as the Turkish Religious Foundation, Kimse Yok Mu (Is Anybody There?) and Turkish Red Crescent (Kızılay) get ready to distribute food, clothing, money and other forms of assistance to the poor in most of the country’s 81 provinces and in more than 120 nations around the world during this year’s Eid al-Adha.

For Muslims across the globe, Eid al-Adha is one of the most important religious holidays of the year. During this four-day holiday, they recall the Prophet Abraham’s willingness to sacrifice his son as an act of obedience to God, before God intervened to provide him with a ram to sacrifice instead.

Muslims likewise sacrifice an animal to demonstrate their obedience to God during Eid al-Adha. The meat from the sacrifice is divided into three parts — the family keeps one-third, another third is given to friends and neighbors and the last share is donated to those in need. Today many in Turkey opt to pay someone else to sacrifice an animal in their name instead of heading down to the butcher to do it themselves.

The Turkish Religious Foundation’s General Director Süleyman Necati Akçeşme, in a statement to the Anatolia news agency last week, said: “Every year we organize this campaign for those who cannot slaughter the animals themselves with the goal of providing sacrificial meat to those who need it most.” The foundation has been performing sacrifices for Eid al-Adha since 1993.

According to Kimse Yok Mu spokesperson Esra Tur, the charity is planning on sacrificing 19,000 animals this holiday.

Kimse Yok Mu Konya branch President Hasan Kıratlı said last week to Anatolia that the aid organization aims to extend its support to the needy in every province of Turkey as well as across the globe this Eid al-Adha. The sacrifice of animals takes place in modern facilities, Kıratlı explained. “The names of the donors will be read one-by-one and after the sacrifices are made we will visit the families and deliver the meat,” he explained.

Tur told Sunday’s Zaman that Kimse Yok Mu has received a flood of donation requests for drought-stricken Somalia, where the charity has been on the forefront of humanitarian assistance. “We are going to send a team — 15 volunteers plus staff — from Turkey to Somalia to distribute the sacrificial meat and aid to the Somali people during Eid al-Adha,” Tur explained.

Turkey has risen as a leader in the international community in its outpouring of support to the drought-stricken country. But Kızılay (Turkish Red Crescent) President Ahmet Lütfi Akar told Anatolia last week that the increase in aid to Somalia can also be explained by the drastic difference in price. “Sacrifices in Somalia are extremely cheap compared to Turkey,” he said, adding, “Because the animals are supplied in the country and the cost of animals is very cheap there, the price of a sacrifice in Somalia falls between TL 100 and 150.”