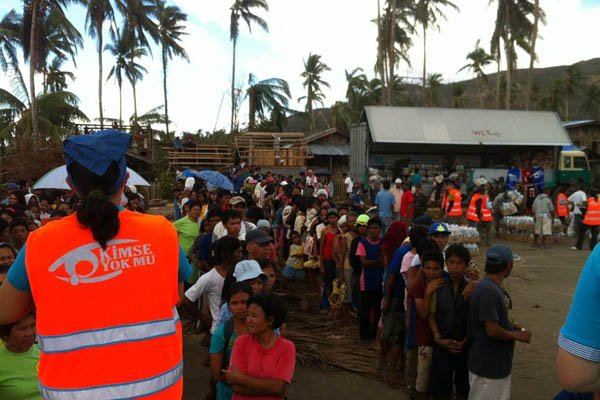 MANILA, Philippines–Unknown to many Filipinos, a Turkish aid organization was among the first to respond to the devastation caused by Super Typhoon “Yolanda” (international name: Haiyan) in Eastern Visayas last year.

Kimse Yok Mu (Is Anybody There) was one of the first international groups to send relief teams to Tacloban City, ground zero for the most powerful storm ever to hit land.

The teams arrived in the city two days after Yolanda struck the region on Nov. 8, 2013.

Kimse Yok Mu is Turkey’s largest aid organization. It was established in 1999, months after Turkey was hit by a devastating earthquake.

Just a month after Yolanda, Kimse Yok Mu was able to raise $2 million in donations, which went to relief operations for survivors in Tacloban City.

Part of the aid was sending 20 students to a private school in Manila. The group will shoulder the students’ expenses for four years. According to a Kimse Yok Mu fact sheet, the aid group has fully paid two years of the four-year scholarship of the students.

The group also donated 105 computers for schools in Tacloban City. It is also paying for the vocational training of 210 students from the city.

A 23-member medical team worked in disaster areas, apart from a five-man psychosocial team that offered psychological support for the survivors.

The group also facilitated the renovation of two damaged clinics, which cost $40,000, and the drilling of 10 water wells in Tacloban City.