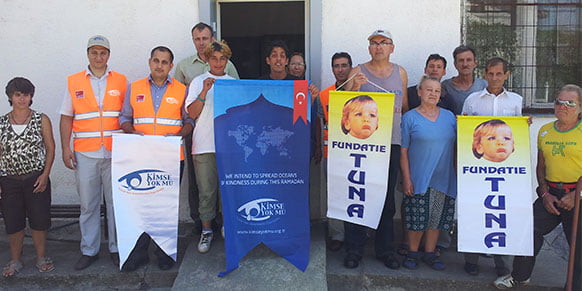 Kimse Yok Mu Foundation in cooperation with the local Tuna Foundation gave away donations of clothing and food to the children of an orphanage in the Romanian capital Bucharest. The two foundations joined together to reach out to a total of 270 orphans including those with mental disorders.The children held a special ceremony in honor of their guests. They performed songs and poems in return as the foundation volunteers engaged closely with them.

The orphanage’s director Adriana Busuoc said they’ve been offering shelter, medical care and educational services to orphaned children under 8. “Thank you very much for your assistance. You did the same for another orphanage just a couple of months ago too. We would like to thank you for making our children smile at least a little bit.”

The volunteers had emotional moments as they handed the donations to the children. “We are ready to do our best as long as we are in Romania.

The Romanian capital Bucharest is home to 30 thousand orphans out of 100 thousand homeless or orphaned children nationwide.