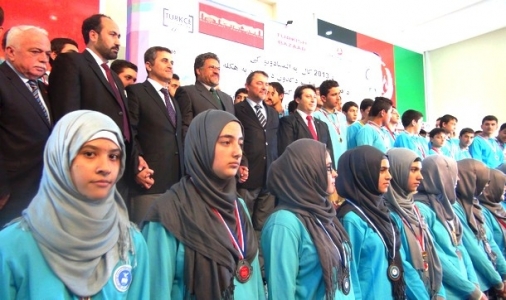 Afghan-Turkish schools are source of pride for the country as they won 147 medals this year at international science olympiads. They won 75 medals last year.

A ceremony was held at the Afghan Turkish school in Kabul to honor and further encourage further the winners. Afghan Education Minister Mr. Faruk Vardar handed gifts to winners of gold, silver and bronze medals. Also present at the ceremony were, in addition to high profile Afghan officials, Turkish Ambassador to Afghanistan Basat Ozturk and president of the Cag Afghan-Turkish Educational NGO Numan Erdogan.

The Education minister made a speech after delivering the gifts and underlined that Turkey has always helped his country in education. He said, “This ceremony’s purpose is to celebrate the efforts the students show and the high quality education these schools provide.”

Turkish Ambassador Mr. Ozturk underscored the importance of the education these schools delivered and stressed that this was more important than every other service that could be done for Afghanistan. Mr. Numan Erdogan, president of the Cag Afghan-Turkish Educational NGO, congratulated the students who won medals, their families and teachers for their hard work and altruism.

Afghan Turkish schools won 75 medals at international science olympiads last year whereas they increased that number to 147 this year, making the overall number 359 since the establishment of the schools.

There was a surprise after the ceremony: the Education Minister Mr. Vardak was invited to ribbon cutting ceremony for the new conference hall, which had been named after him.

Finally, the students thanked their families and teachers for their support while they were preparing for the scientific competitions.