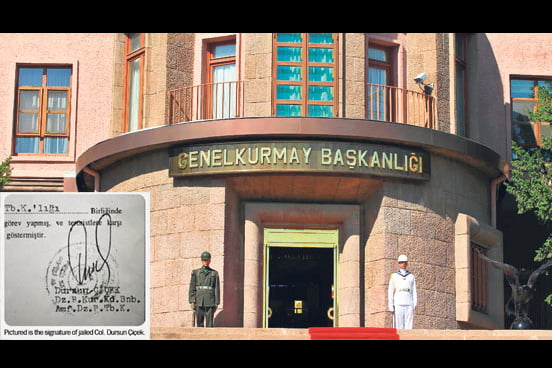 Two soldiers stand guard at the entrance of the General Staff in Ankara. (PHOTOS Sunday’s Zaman)

Documents retrieved from computers of the Information and Support Unit of the General Staff clearly reveal how a pro-coup junta nested within the Turkish military, the Turkish Armed Forces (TSK), has engaged in propaganda to discredit the government and faith-based groups in the eyes of the people.

According to the documents, the TSK set up a unit to carry out the propaganda campaign against groups or individuals that the military thought were harmful to its existence. This unit was established in the 1950s and had branches both in the Special Warfare Department of the TSK and the General Staff’s department of intelligence. The documents said the unit did not initially work effectively in the years after it was established, but it began to be more active as of 1980 when the military staged a coup d’état and set up some institutions, such as the National Security Council (MGK), to put the civilian will under the control of the armed forces. The unit was called the Information and Support Unit in 1995. “Even though the unit carried out some effective operative and tactical activities at those times [after 1995] when acts of terror and religious fundamentalism reached their peak, it failed to turn into an establishment to act in line with the national strategy and in the light of science. And its scope of psychological warfare has been further narrowed since 2002 as part of plans to curb the role and effectiveness of the TSK in the social and administrative areas. And the psychological warfare unit [or the Information and Support Unit] has become a formation taking passive measures [against acts of terror and religious fundamentalism] and failing to even protect the dignity of its name,” according to the documents.

The latest activity of the Information and Support Unit of the General Staff’s Mobilization Department is the setting up and running of a number of websites to support the unit’s propaganda campaigns against the Justice and Development Party (AK Party) government and civilian groups. A deepening investigation into the websites shows that the unit, led by jailed Col. Dursun Çiçek, established 42 websites to back their psychological warfare campaign against civilian groups they deemed “religious fundamentalist,” “separatist,” “pro-AK Party” and “anti-TSK.” Former Chief of General Staff retired Gen. İlker Başbuğ was arrested in 2012 as part of the investigation.

Campaign against the Gulen [Hizmet] movement

Documents retrieved from the hard disks of the General Staff also included information gathered by the military staff about the Hizmet movement inspired by internationally renowned Turkish and Islamic scholar Fethullah Gülen. According to one such document, the movement is well respected among the people in Turkey because “its followers stay far away from conflicts or clashes with others, serve peaceful purposes, live in harmony with other groups and do not seek to work against the interests or welfare of others.” “There is a widespread conviction [among people] that the Gülen group [as the Hizmet movement is referred to by some circles in Turkey] poses no threat to Turkey,” said the document.

In the documents, the General Staff’s Information Support Unit discussed how to bring the financial sources of the Hizmet movement under control so that the movement would be unable to work. The documents also suggested that a conflict that would emerge for leadership after Gülen dies would lead the movement to collapse.

In attempts to prevent the Hizmet movement from working, the General Staff suggested that its harmony with the US and other countries should be damaged. “The US should end its policy of supporting moderate Islam, documents and required information should be seized and shared with the media to show the real faces of Gülen followers to the people, and a widespread conviction should be created in Turkey and Muslim countries that the movement is controlled by the US and serving the purpose of imperialism,” the document notes and adds that schools and other educational institutions currently operating in roughly 50 countries worldwide should be shut down.

The documents seized from the hard disks also feature plans by the General Staff to launch a propaganda campaign to allege that the Hizmet movement and its followers are the driving force behind some ongoing trials in Turkey that aim to cleanse the country of anti-democratic formations.

“Propaganda should be spread that the news [of anti-coup investigations] is leaked to the media by Gülen followers who are nested in the police force and that there is a large number of senior officers in the police force,” according to one of the documents. The same document also reveals plans to discredit the investigations against clandestine networks nested in various state bodies, an alliance that is often referred to as the “deep state.” “We should spread claims that people captured as part of the ongoing fight against the deep state are indeed too weak to be members of the deep state and that the deep state in fact has nothing to do with those weak people, that Gladio is controlled by the US, that the deep state [in Turkey] was rooted out with Turkey’s alliance with NATO, that groups, individuals and institutions that seek to protect national rights have become [by their opponents] a center of accusations and that the US has helped the pro-Gülen formation infiltrate the police force.”

The General Staff, at this point, sought the help of some media outlets to help it spread those claims. Officers at the General Staff wrote news stories and columns to downplay the investigations launched against coup plotters and the deep state and sent them to some newspapers to publish them as if staff members at those newspapers wrote them. “The said campaigns are being carried out by sending documents to columnists, newspaper administrators, editors-in-chief and civil servants via e-mails that feature an imaginary username and e-mail addresses,” one of the documents retrieved from the hard disks of the General Staff indicates.

In one other document, the General Staff complains that websites are not an effective means to carry out a propaganda campaign because it is very easy for computer experts to find out who set up and administered the websites. “The virtual network is an area where covert and semi-covert psychological warfare methods may effectively be applied. It is not appropriate for open methods. For this reason, we are carrying out white propaganda campaigns on our websites. And this decreases the yield we may derive from the websites [and propaganda campaigns]. Websites run by us are subject to bureaucratic transactions, and we always face the risk of being exposed as the administrators of those websites.”

The documents go on to state that the General Staff sought to cooperate with secularist civil society groups and individuals who also oppose the trial against Ergenekon, a clandestine criminal network accused of working to overthrow the government, in attempts to discredit the trial in the eyes of the people. The documents indicate the General Staff should prepare books and brochures about the risk of rising religious fundamentalism in the country and send them to those civil society groups. “In addition, important writings and opinions [denouncing the Ergenekon trial] could be sent to opinion leaders, editors-in-chief of newspapers, leading columnists, civil society organizations and websites of those organizations and deputies,” the documents add.