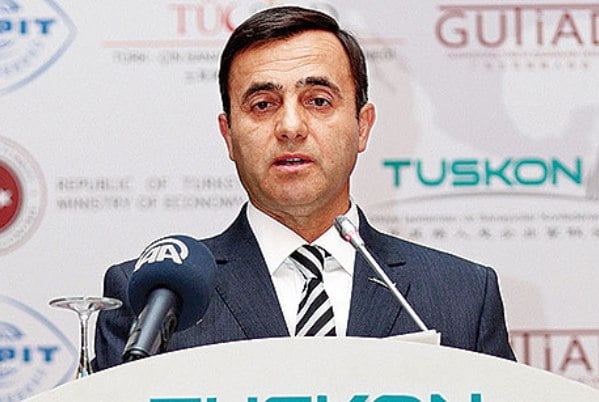 TUSKON said in a statement on Saturday that there are seven federations, 212 associations, 54,000 businessmen and more than 140,000 companies represented under its umbrella and that its founding goal has been to help Turkish businessmen expand their trade to foreign markets.

TUSKON estimated that trade deals accounting for more than $30 billion have been signed in the past eight years from the organization’s activities. Furthermore, 70,000 businesspersons, including 30,000 foreigners, have participated in 19 business forums called the “Turkey-World Trade Bridge” since 2006. It added that it is a known fact that President Abdullah Gül and other state dignitaries have urged not only TUSKON members but also other Turkish entrepreneurs to invest in Africa.

It added that it is “absolutely normal” to meet with leading business circles and advise them about business opportunities in different parts of the world. “We leave it to the conscience of the public to decide if these projects should be criticized and turned into a defamation campaign or if they deserve applause,” TUSKON said in the statement.

The statement came just days after a voice recording surfaced on social media in which Turkish Islamic scholar Fethullah Gülen and TUSKON Secretary-General Mustafa Günay discussed business opportunities in Uganda. Günay also mentioned gifts of pineapples sent from Uganda. For days, government officials including Prime Minister Recep Tayyip Erdoğan publicly made fun of the pineapple reference. Erdoğan even said, “We will not allow a pineapple republic in Turkey,” in reference to the phone conversation between Günay and Gülen, which was illegally wiretapped.

Regarding the recent media reports criticizing TUSKON’s lobbying efforts for Turkish firms abroad, TUSKON President Rızanur Meral told Today’s Zaman that allegations against TUSKON “do not make sense” and that the confederation has always supported Turkish businessmen who want to branch out into global markets. “We will continue our support [for Turkish entrepreneurs],” Meral added.

TUSKON said in the statement that it is Günay’s duty to help Turkish businesspersons build commercial relations with Uganda regardless of whether or not they are members of the business organization. During the phone conversation, Günay told Gülen about a bid to manage an oil refinery in Uganda, and Gülen advised him to inform Turkish companies about the opportunity. The statement said it is saddening to see that Günay’s efforts to make Turkish companies win the oil refinery tender bid have become the subject of irrelevant debates instead of being appreciated.

The statement said the issue about pineapples is part of the Turkish tradition of giving gifts, adding that the organization rejects making fun of the issue. TUSKON condemned the illegal wiretapping of the phone conversation between Günay and Gülen, and claimed that there has been a defamatory smear campaign based on these recordings. It added that TUSKON has already launched legal complaints against this smear campaign.

At TUSKON’s fourth general assembly meeting in March 2012, Prime Minister Erdoğan praised TUSKON for carrying the Turkish flag and Turkey’s name to even the remotest areas of the world.

“TUSKON takes its strength not from interest groups but from the nation. It gets its power, motivation, vision and mission from the nation,” Erdoğan said.

Similarly, former Finance Minister Zafer Çağlayan said in June 2013 that the Turkey-World Trade Bridge business forums were a challenge to the global economic crisis. “We should get a patent for these [business forums],” Çağlayan proposed. Turkish Exporters Assembly (TİM) President Mehmet Büyükekşi reported that TUSKON’s trade bridges are as unique and lasting as the bridges of famous Ottoman architect Mimar Sinan.

Muharrem Yılmaz, president of the Turkish Industrialists and Businessmen’s Association (TÜSİAD), strongly criticized Prime Minister Recep Tayyip Erdoğan for his remarks accusing TÜSİAD of treachery in response to a strong warning the group made to the government, saying that foreign investment would not come to Turkey.

In the strongest warning from a business group to the government so far, Yılmaz said on Thursday that foreign investment would not be made in a country without respect for the rule of law, where legal codes conflict with European Union rules, where public procurement laws have been amended dozens of times and companies are pressured through tax fines.

Speaking at the 44th TÜSİAD General Assembly in İstanbul, Yılmaz told group members that Turkish businesspeople are uneasy about a controversial Supreme Board of Judges and Persecutors (HSYK) bill that will subordinate the judiciary to government control.

Yılmaz’s statement on Thursday regarding government mishandling of the ongoing corruption investigations is the third of its kind since a corruption scandal hit on Dec. 17. This indicates a growing worry in the Turkish business community that the Turkish economy will be hurt by growing political uncertainty as the government tries to derail investigations by reassigning police officers and members of the judiciary en masse and changes laws pertaining to the judiciary.

Speaking at a party rally in Ankara on Friday, Erdoğan slammed the TÜSİAD head for what he says is a negative portrayal of the Turkish economy. “Saying that foreign direct investment [FDI] will not be made in Turkey is treachery,” Erdoğan said, aiming at the business group and its president.

On Erdoğan’s accusation of treachery, Yılmaz harshly criticized the prime minister over his language and said no one could question his patriotism. “I was shocked and very saddened by our prime minister’s remarks. I have worked for this country my entire life. I represent a business association that contributes greatly to the Turkish economy,” said Yılmaz during a televised interview on CNN Türk late on Friday.