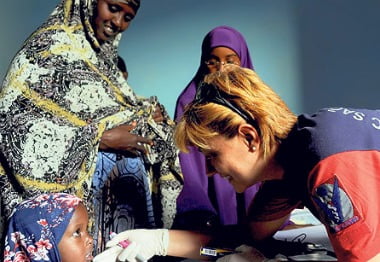 Kimse Yok Mu’s healthcare teams traveled to Somalia three times in the last two months to provide emergency health services and bring medical equipment and medicine to the region. In Benadir State Hospital, the largest hospital in Somalia, the gynecology and pediatric units were handed over to Kimse Yok Mu.

Somali Education Minister Mustafa Aidid Ibrahim has called for a remedy, not a band aid from the international community in addressing his country’s ailments.

Turkish aid organizations, sharing their current and future plans for Somalia with Sunday’s Zaman, seemed to respond, “We’re here for the long haul.” Ibrahim, in an exclusive interview with Today’s Zaman on Thursday, said, “We don’t need a short-term fix, we need a sustainable solution if we don’t want this crisis to happen again.” Turkish aid groups like Kimse Yok Mu (Is Anybody There), the Humanitarian Aid Foundation (İHH), the Turkish Red Crescent (Kızılay) and Doctors Worldwide have been active in Somalia — historically one of the poorest and most violent

countries in the world and now plagued with the region’s worst drought in 60 years — from the beginning.

Asking what a country’s greatest needs are may appear to be an easy enough question, but Turkish charities agree it is impossible to name just a few in Somalia.

Kimse Yok Mu spokesman Esra Tur said, “There are so many ‘greatest needs’ for those people, but I suppose food, water and nutrition are the most essential.” İHH Africa Coordinator Murat Uyar listed 13 “greatest needs,” which boiled down to water, food, shelter and medical care.

Turkey collected a total of TL 500.1 million for Somalia in campaigns that started during the Muslim holy month of Ramadan, according to data the Prime Ministry’s Disaster and Emergency Management Directorate (AFAD) released on Thursday. Kimse Yok Mu and Kızılay together collected a total of TL 192.6 million in their humanitarian relief efforts. In the past several months alone, Turkey has sent food, money, medicine and volunteers to the struggling country. Volunteers have dug wells, provided health services and built schools and hospitals.

Turkish aid organizations’ relief efforts have reached out to the millions of starving and homeless Somalis in a multitude of ways.

Kimse Yok Mu, one of the leaders in the relief effort in Somalia, sent seven food containers weighing 160 tons in total on Aug. 4 to the region. On Aug. 22, a ship carrying 3,700 tons of aid set sail for Mogadishu. A total of 14,500 food packages, each valued at $25, were distributed to Somali families. Meat was distributed to 9,500 families. To better organize such massive amounts of aid, Kimse Yok Mu has set up a logistics center consisting of storage, packaging and distribution centers.

Kimse Yok Mu has also made an impressive contribution to the healthcare of Somalis in the midst of the humanitarian crisis. The charity’s healthcare teams traveled to Somalia three times in the last two months to provide emergency health services and bring medical equipment and medicine to the region. In Benadir State Hospital, the largest hospital in Somalia, the gynecology and pediatric units were handed over to Kimse Yok Mu. “The hospital will be fully equipped with state-of-the-art equipment following the completion of necessary repairs,” Tur said.

Between Aug. 30 and Sept. 12, Kızılay completed work on the Hayat Tent Camp, which included the erection of 249 tents in the area, according to the charity’s second Somalia aid operations report. This camp has provided shelter for 249 families (1,370 people). Kızılay continues to periodically distribute aid to the families sheltered in the Cezire Hayat Tent Camp.

Kızılay is working closely with the Somali Transitional Government in planning and carrying out various projects, such as more efficient aid distribution, the erection of a transfer camp, garbage collection and painting, and the establishment of a nursing and medical technician camp academy.

But more importantly, with half of Somalia’s population still without aid, a chronic security threat and the possible onslaught of more arid weather, these organizations assure Somalis they are not going anywhere.

Kimse Yok Mu’s Tur said: “We have just opened our office for volunteers in Somalia and are planning to stay at least a couple of years … and as long as those people need us.”

For example, the charity’s volunteers are not only providing healthcare but also training local doctors in order to make the healthcare services more sustainable. Volunteer doctors of Kimse Yok Mu have begun surgical operations in the region.

Kimse Yok Mu’s Tur said the organization is not satisfied with keeping the status quo. The charity’s medium and long-term goals for future projects incorporate the sustainability that Somali Education Minister Ibrahim stressed is necessary for the future of the country.

“Continuing its aid activities in Africa at full speed, Kimse Yok Mu aims to increase the number of people to whom hot dishes are given to 150,000 and to establish tent cities for around 2,000 homeless families,” Tur said.

According to Tur, 70 percent of Somali’s population of 3 million cannot reach water sources. “People and animals die since water cannot be found in the region and people become forced to migrate to survive,” she said.

Two schools in the region will be repaired, fully furnished and then allocated again for education. Furthermore, Kimse Yok Mu, which has already brought more than 300 Somali students to Turkey for a quality education, will continue to provide scholarships for the country’s brightest students so as to meet the country’s need for a skilled workforce.

The conditions of existing hospitals will be improved, local doctors will be trained and healthcare services will be made permanent. The refugees will be supported in returning to their villages and homes. Permanent projects, such as the establishment of schools, dormitories, orphanages, soup kitchens and vocational courses, will be developed in order to enable Somalis to take their futures into their own hands.

Similarly, the İHH said it has been in Somalia for years and plans to keep it that way. Uyar said, “The İHH already has been working in Somalia for the last 15 years in the fields of education and social and medical care. As for the food crisis, the activities will continue for at least another three years because the drought has spread and it sounds like it’s not over. But as for other fields, the İHH is there and the activities will continue.”

Among its sustainable projects, the İHH opened an “education institute” for widows in 2005. In cooperation with the Zamzam Foundation, the İHH provided scholarships to 25 students at Mogadishu University in 2006. The İHH also established a “development center” to provide occupational training to Somali people aged between 18 and 35.

“In order to help families of orphans to make a living and stand on their own two feet, we gave the families of 40 orphans sewing machines and cows, while we gave another 20 families sesame and flour milling machines. In addition, the İHH offered medical examinations to 400 orphans and treated 137 children with various diseases,” Uyar said.

Kızılay’s International Relations executive said the organization has long-term forecasts for future aid as well. “We are planning on assisting Somalia for at least the next two years,” he said.

One of the main reasons behind the loss of momentum in Turkey’s once-intense efforts to boost relations with African states is the Turkish government’s effort to win domestic battles at any cost. In one such attempt, the Turkish government started to work on a plan to get states to close down Turkish schools abroad that are affiliated with the Hizmet movement, which is inspired by the teachings of Islamic scholar Fethullah Gülen and known as one of Turkey’s most important soft-power instruments.