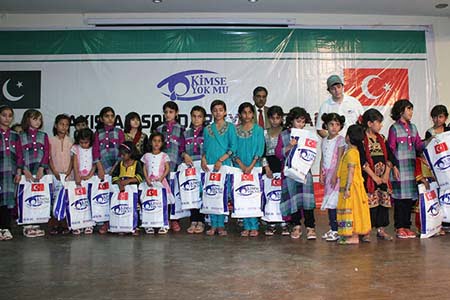 As a part of “the Blessed Birth” activities, a largely attended event intended to uplift 500 orphans took place in the capital Islamabad, Pakistan.

Kimse Yok Mu, which has a track record of various activities for orphans in 20 different countries, this time, geared up for the Pakistani orphans. Kimse Yok Mu officials, in person, visited the orphanages across the capital Islamabad and identified the needs. A total of 500 orphans from seven orphanages and a women’s shelter were measured one by one, in advance, and presented their clothes and shoes at the event.

Islamabad Governor Tarik Pirzada, Mayor Tahir Shahbaz, Third Secretary Sefa Ozturk and Undersecretary for Security Muzaffer Erkan from the Turkish Embassy in Islamabad, general manager of Pak-Turk Educational Institutions Unal Tosur and Pakistani businessmen were in attendance of the event at which they dined together with 500 orphans in the hall. The orphans, overjoyed to receive gifts of stationeries, toys and food at the end of the event, spent an unforgettable day.

Source: [in Turkish] on KimseYokMu, 30 April 2013. English translation is retrieved from HizmetMovement.Com

Kimse Yok Mu Foundation held yet another iftar dinner for Thai Muslims as a part of its Ramadan activities. Ramadan is different in Thailand from Turkey. Families choose to break their fast together with others at the mosques rather than doing it alone at home.