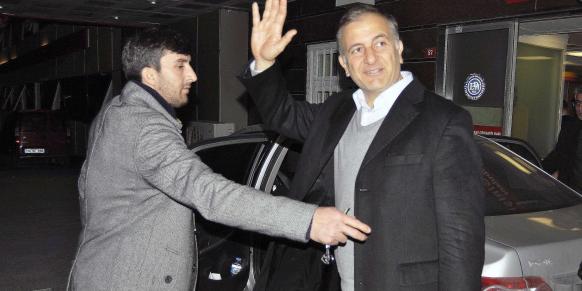 Ekrem Dumanlı, the editor-in-chief of Turkey's most circulated paper, the Zaman daily, waves reporters as he leaves the Eyüp State Hospital. (Photo: DHA)

Dumanlı and Samanyolu Broadcasting Group General Manager Hidayet Karaca, who were detained on Sunday along with 25 others in a police operation that targeted journalists, TV scriptwriters and former police officers, were referred to Eyüp State Hospital early on Tuesday for a medical check-up.

“[There is] no return from democracy,” Dumanlı said twice, when asked by journalists while he was leaving the hospital whether he has a message for the public, implying that Turkey should not take a step back on its journey toward democracy.

Dumanlı and Karaca were taken back to the İstanbul Police Department after their medical exams.

Dumanlı’s lawyer, Nazif Aktaş, stressed that his client was most likely referred to the hospital because his detention period has already expired. The detention period for Dumanlı and Karaca was extended for one more day, which is not customary, their lawyers said at a press conference in front of the İstanbul Police Department on Monday.

The Turkish public has been up in arms against the police crackdown, which has also drawn strong criticisms from the European Union, the US and the world’s leading human rights groups.

Freedom House, a US-based nongovernmental organization advocating democracy, political freedom and human rights, has said that the detention of prominent journalists from Zaman and the Samanyolu broadcasting group in Turkey appear to be “government retribution against journalists reporting on corruption and criticizing the government.” Freedom House called on the Turkish government to end the crackdown on free speech in Turkey.