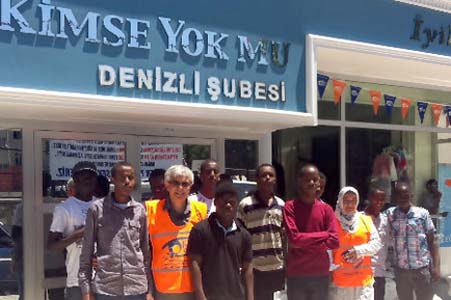 Channeling the donations and sums from its fundraising activities to the region, Kimse Yok Mubranch in Denizli province takes the African orphans under its wings. Another event entitled “The Orphan” in the series was held at Denizli Police Department local facility with the participation of KYM Denizli President Fahrettin Aytug, the branch director Mehmet Tulunay, Denizli Governor Abdulkadir Demir with his wife Nurtac Demir and some 140 philanthropist women.

At the event, the medical doctor Veysel Akansel who had joined to a voluntary medical team headed to Darfur, Sudan and Kenya, and visited the orphanages in the region gave a presentation on his experiences. “In Africa, alone, 5,760 children a day and 2,102,400 a year are left orphaned due to reasons such as civil wars, natural disasters, and insufficient health care infrastructure. Every 15 seconds, another child becomes AIDS orphan in Africa. Kimse Yok Mu extends its helping hands to those orphans left helpless in Palestine, Sudan, Indonesia and Somalia. The orphans suffering the same destiny across the world are waiting for compassionate hands to light up their futures” said Akansel.

He further informed that Kimse Yok Mu, with contributions from its philanthropists and volunteers, carried out activities including rebuilding, renovating and repairing orphanages; improving nutrition, living and schooling conditions; securing orphans’ futures by providing occupations and meeting their any social needs. He also revealed that 2013 activity agenda consists of countries including Afghanistan, Gaza, Nepal, Tanzania, Bangladesh, Southern Sudan, Central Africa, Burundi, Benin, Djibouti, Senegal, Pakistan, Cape Verde, Comoro Islands, Somalia, Indonesia, Myanmar and Sudan. He added that the cost of sponsoring an orphan is 30 dollars per month or 360 dollars per annum.

Next, Nurtac Demir gave her remarks in which she told she is assuming the yearly expenses of an orphan. The president Aytug presented a ‘thank you’ plaque to Mrs. Demir.

Source: [in Turkish] on Cihan, 2 May 2013. English translation is retrieved from HizmetMovement.Com

Sait Gürsoy I recently went to Morocco, as an Anafen Schools guest with a group of journalists. The aim was to monitor educational and cultural exchanges between the two countries. Under the leadership of my beloved brothers -the schools’ vice general managers, Ismail Efe and Yasin Yucel- we not only had a nice touristic tour […]

The Turkish wing of the UK aid group Doctors Worldwide and Turkish charity Kimse Yok Mu (Is Anybody There) are set to extend a helping hand to the people in Gaza, which has been experiencing Israeli attacks since Wednesday. A written statement from Kimse Yok Mu has said that the foundation is preparing to send […]