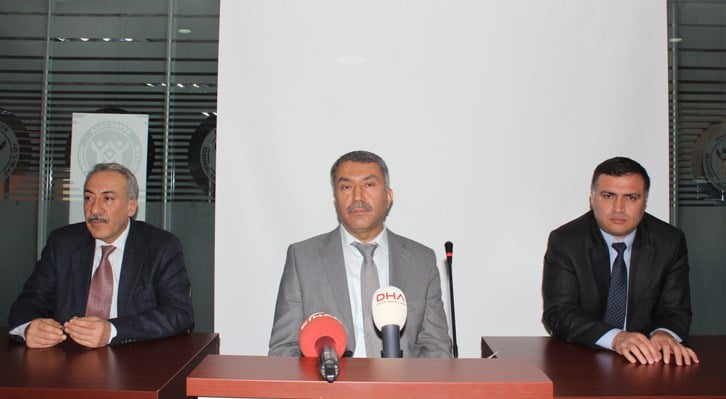 Circles close to the Justice and Development Party (AK Party) government have been conducting a large-scale black propaganda war against the Hizmet movement and Gülen since a corruption scandal erupted last month in which three Cabinet ministers’ sons, many state bureaucrats and renowned businessmen accused of giving bribes in exchange for favors were implicated. The government has accused the Hizmet movement of participating in a plot that is behind the corruption investigation.

A number of CSOs in Siirt province in southeastern Anatolia issued a joint press release to condemn an ongoing defamation campaign targeting the Hizmet movement.

Twenty-four CSOs said in their declaration that tagging the movement with defamatory labels such as “the parallel state,” “a gang,” “a virus,” “a secret organization” and “Hashishin” has broken many hearts. It said that people are labeled without any information, document or any type of solid proof.

Gencer also criticized the government’s move to shut down dershanes, private prep schools preparing students for university entrance exams and reading halls — many of which are run by Hizmet, especially in east and southeast Anatolia, which have more impoverished populations. Furthermore, the government’s profiling of civil servants with regard to their beliefs, ideologies and lifestyles and their removals in mass numbers are also unacceptable, he added.

“Fethullah Gülen, who lives a life around the axis of love and respect and has no aim other than God’s contentment, is described as if he is the leader of a gang for international public opinion. All these actions are extremely sad for all citizens who have set their hearts on Hizmet,” Gencer asserted.

The Platform of Persons Devoted to Education, which consists of 50 SCOs, held a press conference in Adana province on Wednesday in which they slammed a defamation campaign being conducted against the Hizmet movement since the corruption probe launched on Dec. 17, 2013.

Speaking on behalf of the platform, Yılmaz Seyren said, “The fact that baseless defamatory statements were used for Turkish schools, which were opened both inside and abroad with the moral and material support of the self-sacrificing Anatolian people with high human values, dershanes, cultural centers and reading halls deeply hurts the public conscience.”

Seyren harshly criticized Prime Minister Recep Tayyip Erdoğan’s recent likening of the followers of the Hizmet movement to Hashashins who reportedly used to kill people in 12th century Persia and Syria while under the influence of opium, stating that the fact that the Hizmet movement volunteers were likened to Hashashins — an organization which is associated with drugs, massacres and assassinations in history — hurt the public conscience.

Calling on the prime minister to clarify his words, Seyren said that the public became shocked when they witnessed Turkish schools that work as Turkish ambassadors abroad were described as gang shelters by Erdoğan at the recent Ambassadors’ Conference.

Representatives of 35 SCOs held a joint press conference in Hatay province on Wednesday to protest the defamation campaign against the Hizmet movement. Speaking on behalf of the SCOs, Hatay’s Association of United Industrialists and Businessmen (BİRSİAD) President Ali İşgören defined the Hizmet movement as a civil society movement consisting of volunteers aiming to create a culture of living together within the framework of universal human values. He said that the movement engages in activities such as introducing Turkish culture and language across the world, providing humanitarian aids to people in need in various parts of the world, conducting educational efforts based on universal values and raising persons with a love of Turkey in their hearts, asserting that the movement has never been involved in any activity that is against the Turkish republic.

İşgören also said they were worried as the businessmen or financial institutions believed to have link with the Hizmet movement are being pressured by arbitrary inspections and threats.

Various associations of businessmen in Tekirdağ province also held a joint press conference on Wednesday in which they said the defamatory statements, such as gang, parallel state and spy, used against the Hizmet movement cannot be accepted. Speaking during the conference, Tekirdag Active Industrialists’ and Businessmen’s Association (TASİAD) Chairman Kasım Özadalı said that it is not fair to liken a movement, which is even against smoking and which cannot even harm a fly, to Hashashins.