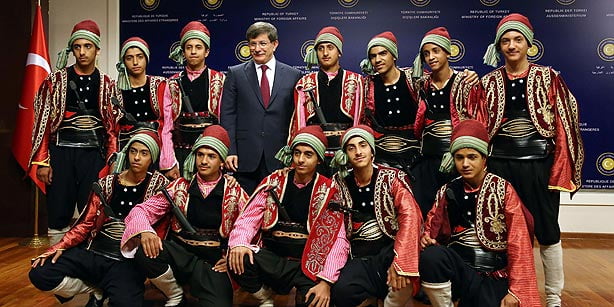 SEVGİ AKARÇEŞME
Closing down schools and being a professor seem mutually exclusive, but thanks to the extraordinary conditions in Turkey we have seen them coexist.

We have started the week by hearing about the attempt of Turkish Foreign Minister Ahmet Davutoğlu to close down the Turkish schools around the world which have been opened by entrepreneurs inspired by the Hizmet movement. This shocking report came as bitter evidence of how Davutoğlu, who takes pride in being an academic by profession at every opportunity, has quickly adopted politics, which he entered comparatively late. In other words, Davutoğlu seems to be doing his best to deserve his spot in the post-election “balcony photo” in which Prime Minister Recep Tayyip Erdoğan included him.

One cannot help but wonder about the underlying reason of the “eclipse of reason” that is massive enough to lead to lobbying against Turkish schools which have become a source of pride for Turkey globally. The attempt to close down these schools is an indicator of hatred/resentment among some against the Hizmet movement, which laid the foundation for these institutions.

The extremely polarizing rhetoric of Erdoğan, which was full of baseless accusations and slander that aimed to create a fictional enemy, has somewhat resonated in the public opinion. Apparently, those who believe that they could win by taking sides with Erdoğan and his oligarchic clique must have thought that “Hizmet bashing” is a good political investment. Otherwise what could be the benefit of obstructing the Turkish schools in approximately 160 countries, which have become an important element of Turkey’s soft power? The perpetrators of such an attempt are destined to lose in the long run. They will be labeled as people who shut down schools of their fellow citizens abroad and as people who ran amok with political greed at home.

Davutoğlu, who talks about complaint letters about Turkey sent from groups in host countries to their governments as a pretext to shut down these schools, not only fails to prove the existence of such letters, but also say that they are not addressed at the schools. Such a claim terribly resembles the claims that “they attacked my headscarved sister in Kabataş,” “Bank Asya bought dollars on Dec. 17” and “the prime minister was blackmailed over prep schools,” which turned out to be baseless. Even if there were such letters from civil society organizations, why punish the schools?

The Turkish schools, which have proven their quality even in a competitive system like the US, serve as honorary Turkish embassies, especially in Africa. Having gone to many African countries even before Turkish diplomats, these schools have established bridges and a bond of trust. Without the mobilization of these schools by Turkish business communities, the Africa opening that Turkish diplomacy is so proud of could have never been achieved. The Turkish Ministry of Foreign Affairs is shooting itself in the foot.

Fortunately, African leaders are not suffering from a total eclipse of mind/reason like ours! The Kenyan president, who paid a visit to Ankara on Tuesday, praised the schools as the president of South Africa went further and called Turkish entrepreneurs in his country his brothers as he welcomed them.

It is impossible to explain the lobbying against Turkish schools by means of conscience. Apparently this is what happens when greed and hatred go beyond reason.

Still there is no reason to be hopeless. Governments come and go, but social phenomena remain. Turkish schools will not be shut down due to the campaign of those who can only afford to bribe a certain country in Africa. The losers will be those who undertake such an attempt.