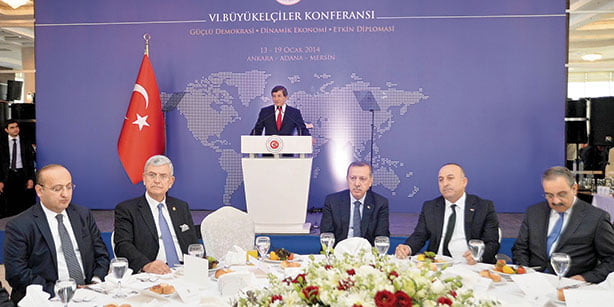 ANKARA
Turkey’s ambassadors have expressed displeasure over Prime Minister Recep Tayyip Erdoğan’s remarks that called on them to “tell the truth” to their foreign interlocutors, saying that defending the government against corruption allegations in not the ambassadors’ business.

Speaking during the annual gathering of ambassadors in Ankara, Erdoğan labeled the corruption investigation involving former government ministers nothing but a “treacherous plot” to sabotage Turkey’s international standing and ordered Turkish ambassadors serving abroad to “tell the truth” to their foreign interlocutors.

A number of ambassadors, speaking on the condition of anonymity, told Today’s Zaman that they are disturbed by the Foreign Ministry being used as an instrument for current political issues and stressed that defending the government over abstract allegations is not their job.

“We represent the Republic of Turkey and our discriminating between Turkish citizens is out of the question,” an ambassador said, stressing that the remarks of Prime Minister Erdoğan are based on abstract accusations.

“The process that began on Dec. 17 is a coup attempt disguised as an anti-corruption operation. It is an attempt to sabotage democracy, the nation’s will, the settlement process [of the Kurdish problem] and our foreign policy,” Erdoğan said while addressing the ambassadors.

He said the government expects the ambassadors to tell their interlocutors [abroad] the truth to and to exert more efforts to foil this treacherous campaign that targets the whole of Turkey. “I especially ask you to underline that this is not an anti-corruption operation but a coup attempt disguised as such,” Erdoğan stated.

Without openly naming it, Erdoğan has accused the Hizmet movement led by Turkish Islamic scholar Fethullah Gülen and “its foreign collaborators” of attempting to overthrow his government through a “judicial coup” ever since the corruption probe that shook his government became public on Dec. 17 following a wave of detentions.

Another ambassador told Today’s Zaman that a written directive is needed for Erdoğan’s orders to become valid. “Even if a written statement comes from him [Erdoğan], if a person from any of the groups mentioned were to find themselves in trouble, wouldn’t we help them? Of course we are,” he said.

Speaking to Today’s Zaman, a diplomat said that if a written statement is issued, they will have to put it into action, but stressed that they will have a hard time explaining the situation that followed the corruption and bribery probe.

In his remarks at the sixth ambassadors’ conference, Erdoğan defended the measures that have been taken since the corruption probe became public, saying they are not an intervention into the judiciary but a step designed to fight an “illegal organization” within the judiciary, apparently referring to the Hizmet movement. “The real face of this organization must definitely be disclosed abroad,” he said.

Erdoğan was not the only one who called on the ambassadors to inform foreigners about the activities of the Hizmet movement.

Speaking on Thursday at the same conference, newly appointed Interior Minister Efkan Ala told ambassadors serving abroad: “We cannot allow black propaganda to be spread at a time when things we do not deserve are taking place. One of the best ways to eliminate this is information, providing correct information to the international community.”

Ala also accused “some circles” of preventing Turkey from solving the problems stemming from the Kurdish issue, saying: “Turkey has decided to solve this problem and took steps to this end. When Turkey … began to solve the problems, some circles tried to prevent this.”

Furthermore, the government issued a proposal earlier this month to restructure the Supreme Board of Judges and Prosecutors (HSYK). If adopted, the bill will give the government a tighter grip over the judiciary, according to legal experts.

Ala also said every issue also interests ambassadors and said: “If it interests Turkey, the whole responsibility of this abroad is yours and domestically with the governors. … There is no area that does not concern you. You cannot say ‘this is not my business’ on the issue that you are informed.”

Erdoğan’s remarks targeting the Hizmet movement drew attention in terms of its schools abroad. When asked about what will happen to Turkish schools established by the movement in foreign countries, the ambassadors said a written directive issued by President Abdullah Gül when he was the foreign minister is still valid.

“For us to enforce the order of the prime minister, a written statement is necessary. However, a written directive issued during the term of [former] Foreign Minister Abdullah Gül is still valid. According to this directive, we are supposed to help the mentioned group,” the ambassador said.

Gül issued a statement in April 2003 ordering the ambassadors to provide the needed help to Turkish schools abroad. The Foreign Ministry declined to comment on whether an investigation was opened into Turkish schools broad following Erdoğan’s remarks.

Another ambassador said that the Turkish schools are a source of pride for the Turkish government in the African countries. “We have supported those schools thus far. Opposing these schools and acting against them will damage our credibility and Turkey’s image,” he said, pointing to the role of the members of the Hizmet movement in improving the economic ties between Turkey and other countries.