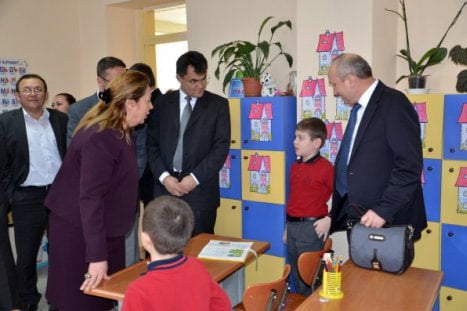 AK Party Deputy Ulker Can highlighted the contribution of Turkish Schools to development of host countries and to raising a brilliant future besides fostering the global peace: “Whatever country we have visited so far has a Turkish School. It makes us feel proud to see the government officials and local people showing their appreciation of the schools,” stated Can.

International Simferopol Schools General Manager Said Enver Yildiz informed the group about the school operating in Crimea since 2003: “Our schools got the first place in the nationwide Top 100 Schools contest. This achievement has qualified our school to be listed at the record book of best 380 schools of Ukraine and Crimea. Moreover, Crimea Supreme Assembly granted an order of merit to our school. It was the first time in Ukraine and Crimea’s history that a foreign institution was granted that merit,” said Yildiz.

Simferopol International School, sponsored by Turkish entrepreneurs, was launched in 2003 academic year in Ukraine’s autonomous territory, Crimea. The school offers education in Ukrainian and Russian, starting from kindergarten grades. In addition to native languages, Turkish, English, Crimean Tatar and French language classes are available at the school as well. Starting from its third anniversary, the school has marked significant achievements at both national and international science competitions. To exemplify, they won a bronze medal at a recent International Environmental Project Olympiad held in Turkey. A considerable number of children and relatives of prominent names of the country have attended Simferopol School to date.

Source: Published in Turkish on TimeTurk.com, 27 February 2013. English translation is retrieved from HizmetMovement.COM