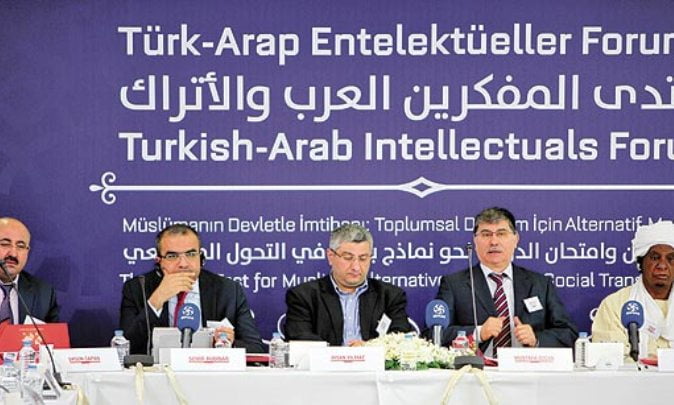 Gathering in İstanbul at a meeting organized by Turkish Review and Hira magazine, Arab and Turkish intellectuals have discussed the role of the state in Muslim societies and agreed that Islamist politicians have lost their test with power, as they were transformed by the state instead of transforming the state.

Stating that Islamism differs in the Arab world and Turkey, the intellectuals participating in the “Turkish-Arab Intellectuals Forum” said the state should not be sanctified.

One Islamic scholar and columnist for the Zaman daily, Ali Bulaç, commented on the journey of Islamists in Turkey, saying those who came to power with the promise of changing the state became part of the state as they began to enjoy the benefits of state resources.

According to Bulaç, the mistake of Islamists in Turkey was to desire power for the sake of power. Another mistake was making religious communities dependent on the state, although they used to act independently prior to the Justice and Development Party (AK Party) government.

Bulaç further argued that because of the corrupt rule of Islamists in Turkey, there has been hatred towards Islam among secular people in the country. He argued that the “old forces” that used to control Turkey are trying to take advantage of the current corruption debate in Turkey and eliminate all religious communities with the help of the AK Party.

“There are not any rules regarding the state,” said Dr. Ahmad Kalul from Tunisia, noting that the “ummah” is free to decide the nature of the state depending on the time and conditions.

According to Hasan Mekki from Sudan, who is president of the International University of Africa, relying on ideologies when it comes to governance goes against the interests of the community, since ideologies are not open to criticism and ask for complete obedience.

Associate professor İhsan Yılmaz from İstanbul’s Fatih University said it is not possible to talk about a “Turkey model, but a Turkey lesson” while emphasizing the importance of rewarding people not based on their faith, but on their merit.

Sociology professor Semir Budinar from Morocco said that there is a chance in front of the Arab world now, because when looking at Turkey, they used to see the state and society as a single entity. He says that starting with the row between Turkey’s Islamist government, the AK Party, and the Hizmet movement, people have become able to make a distinction between the state and society. According to him, the Hizmet movement has made a great contribution to the realization of dreams and ideals in the Muslim world.

Dr. Cemal Seferti from Syria, who wrote his PhD thesis on the Hizmet movement, said the success story of Turkey is a result of a “societal” success as a whole. “Hizmet’s contributions to this success should not be overlooked,” Seferti says, adding that as a civil society organization, Hizmet sets an example for Arab societies.

Kerim Balcı, editor in chief of Turkish Review, said the aim of the forum is to ask whether Muslims are able to remain Muslims when they come to power, referring to the recent corruption allegations made against some members of the AK Party government. According to him, after staying in power for some time, the current government began to do non-Islamic things.

Commenting to Today’s Zaman, Cairo University academic Mohammed al-Sharqawi said the relations between people and the state should be reevaluated in the Muslim world. He said that when Islamists stay in power for a long time, they began to degrade in terms of democratic and Islamic values.

Dr. Jawad Anani, former deputy prime minister and foreign minister of Jordan and current president of the Jordan Economic and Social Council, told Today’s Zaman that the Muslim world generally looks at Turkey, Indonesia and Malaysia as hopeful examples of democracy, but he also added that India is overlooked as a country where democracy serves as the glue in a multicultural structure.

Further commenting to Today’s Zaman, Dr. Mekki said that for the first time in the Muslim world, Islamic scholar Fethullah Gülen has introduced a model of transforming society without conflict with the state. According to him, Gülen wanted to succeed through evolution rather than revolution.

In a similar analysis, Zaman columnist Abdülhamit Bilici told Arab intellectuals that in its 40-year history, the Hizmet movement has not been in favor of using politics to transform society.