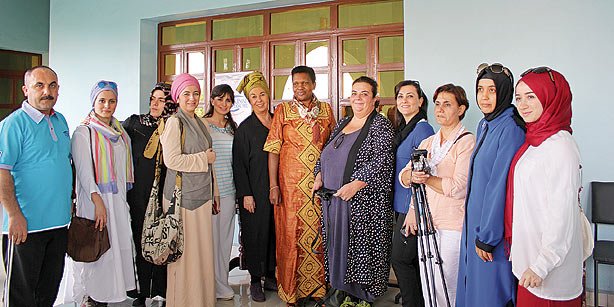 A group of Turkish businesswomen watched the foundation for an orphanage they funded being laid on Sunday in Burundi.

The orphanage is part of an effort to save children orphaned by the country’s 1993-2005 civil war from a life in makeshift shelters and miserable conditions.

Early on Sunday, a modest groundbreaking ceremony was held, attended by Burundi representative of the Turkish Confederation of Businessmen and Industrialists (TUSKON) Mustafa Arslan, Africa coordinator of the Kimse Yok Mu foundation Orhan Erdoğan and the Turkish businesswomen who paid for the orphanage.

Following a heartbreaking visit on Friday to the run-down, two-room building in poverty-stricken Bujumbura that is used as a home for Muslim children who lost their parents, mostly in the civil war, the Kimse Yok Mu delegation started a campaign to raise money for the building of a brand-new orphanage in the city immediately. The owner of the current orphanage has asked staff to move out as soon as possible.

A gynecologist, Dr. Berra Önsoy Gidemez, decided to take the lead and took responsibility for the project, along with President of the World Businesswomen Association in İstanbul (DÜNYADER) Esra Kavurmacı.

Speaking to Today’s Zaman, Gidemez said that she was especially affected by the delegation’s visit to the Muslim orphanage because of the terrible living conditions of the children. “I imagined having to tuck my son into one of those beds and couldn’t sleep in the hotel on the night after the visit,” she said.

Gidemez said she would partially finance the orphanage herself and started a fundraising campaign among her patients on her social media page. “No parent could remain indifferent to the scenes that we witnessed in the orphanage,” she added, describing the orphanage’s dirty clothes and closets, primitive kitchen and unhygienic conditions.

The current run-down orphanage is managed by an aging war widow named Faiza, and hosts 37 children of different ages.

In a country of approximately 9 million, there are 800,000 orphans across Burundi.

The Kimse Yok Mu delegation met the first lady of Burundi in her hometown on Saturday in another orphanage, which the Turkish association completely furnished.

The Turkish businesswomen visited the Buntu Foundation headed by the first lady of Burundi, Denise Nkurunziza, in the city of Ngozi, approximately three hours from Bujumbura.

The first lady thanked the Kimse Yok Mu delegation for their cooperation with Burundi officials, adding that at the new orphanage, vocational training will be given to orphans who were not able to continue school due to war in the country.

Kavurmacı thanked the first lady for hosting the Turkish businesswomen, adding that their only concern is educating new generations.

İstanbul-based artist Günseli Kato presented the first lady a handmade accessory that she designed before Nkurunziza gave the delegation a tour of the orphanage.

A Burundi local who studied engineering at Dokuz Eylül University in İzmir, Joseph Bizimana, served as the interpreter during the meeting.

The Turkish women’s delegation also visited an orphanage and a rehabilitation center for handicapped children led by Christian aid organizations in Bujumbura.

The delegation, which also met with local businesspeople, left Burundi for Kenya on Sunday. (Cihan/Today’s Zaman)