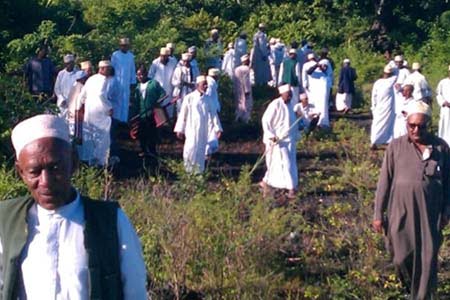 The Muslim population, having donated the plot of land on which the Turkish school in the island of Comoros will be built, dressed in their most festive garments and gathered in the forested land to pray.

They were praying so that the foundation of the school could be laid as soon as possible. Meanwhile, the people of Comoros also remembered the Turkish people and the volunteers of Kimse Yok Mu in their prayers, who had donated their sacrificial animals and sent them over from thousands of kilometers away last Eid

Halil Yurtsever from Urfa, having settled in the island of Comoros to open up a new school, said, “Two philanthropists from Comoros donated 25-acres of land in order for a Turkish school to be built on the island. Upon this, the people of Comoros dressed in their most festive outfits, gathered in the land where the school is to be built after the Sunday morning prayer, completed a full reading of the holy Qur’an and prayed all together.” This very sincere organization of the people of Comoros made Yurtsever quite sentimental, and he continued, “The amount of flat land you can find on Comoros is very limited. We were interested in buying a piece of land but they didn’t give it to us because the land belonged to the state and was being used as a soccer field. Another piece of land was located next to a volcano and we decided against that location so that lava wouldn’t burn up our school in the long run. In the end, two of our Muslim brothers, Ahmad Bazi and Ebu Nabil, donated a wide piece of land on the largest island of the country, Ngazidja. We made agreements with a construction company, and, with God’s will, following these prayers we will be able to lay down the foundation for our school.”

Yurtsever arrived in Comoros about a year ago. He underlined the facts that Comoros was composed of a group of islands located on the Indian Ocean, was the second poorest country of the world, that there was no traffic lights in the country, that the percentage of the people that could read and write was 50% and that the rate of unemployment had reached a terrifying rate of 60%. Lastly, Yurtsever conveyed the words of the people of Comoros, “The people of Comoros were very pleased with our arrival. ‘After you arrived, roads came to our land, our mosque was built, you brought abundance to our island,’ they said. With God’s will, if we are able to open our school, we will also begin to provide education to these people of limited means.”