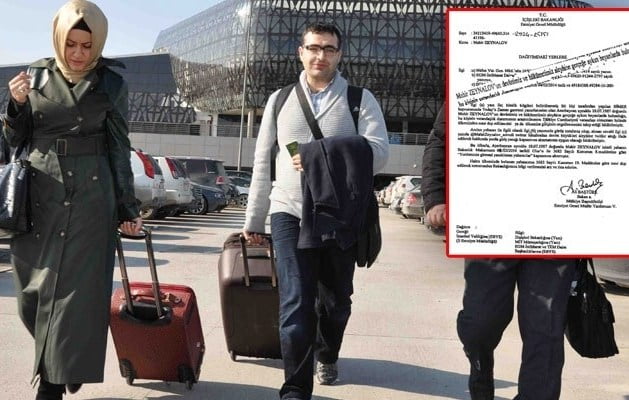 Mahir Zeynalov has the distinction of being one of the first journalists kicked out of Turkey by the government of President Tayyip Erdogan in a crackdown on the media.

And he considers himself lucky; 55 journalists he worked with at Zaman, once a leading Turkish newspaper with a circulation of about a million, were later jailed in the crackdown.

Zeynalov was in Tulsa for several days this week, speaking at the University of Tulsa, Oral Roberts University and other venues about recent troubles in Turkey.

A native of Azerbaijan, he moved to Turkey when he was in his late teens, and is married to a Turkish woman. He has worked as a correspondent for newspapers in Turkey, Azerbaijan and the United States, the last seven years for Zaman, a publication associated with the Fethullah Gulen Movement in Turkey. Gulen is a Muslim cleric exiled from Turkey now living in Pennsylvania.

Zeynalov’s troubles came to a head in late 2014, he said in a Thursday interview.

He was called to a police station for questioning after writing about a scandal in the Erdogan government.

“It was quite embarrassing for Erdogan,” he said.

He was charged with inciting hatred and animosity among the public. He thought he could avoid arrest by staying in the Zaman newsroom in Istanbul, he said, but when police came to the newsroom, he fled out a back door and went into hiding, ditching all electronic devices that could be traced.

For three days, his wife did not know what had happened to him.

He finally surrendered to the airport police and was forced to leave the country, without his wife.

He went to Azerbaijan, but trumped-up charges were filed there, inspired by Turkey, he said, and he fled to the United States.

“I was newly married. …. I had a beautiful house, a good-paying job, a good life.

“Suddenly, in one night, it all ended. I had to leave overnight. I couldn’t say goodbye to my friends. I couldn’t even sell my furniture …”

Zeynalov has lived in the Washington, D.C., since then.

He worked as a correspondent for Zaman until the Turkish government shut down the newspaper last July following a coup attempt. Erdogan blamed the coup attempt on Gulen, and asked the United States to extradite him. The U.S. refused to do so, saying it lacked evidence of his involvement in the coup.

The Turkish government shut down 149 media outlets, Zeynalov said, many of them not associated with the Gulen Movement.

“Erdogan has cast his net wide,” he said.

Zeynalov worked to get his wife a visa to move to the United States, and she joined him in November.

He said the couple don’t know what their future holds, but if they return to Turkey now, they will be arrested.

“I’m here for good. I’m banned from Turkey. I can’t even go to embassy,” he said.

He said he has been offered newspaper positions, but feels the most important thing he can do now is travel around the United States educating people about the crisis in Turkey.

“Turkey is a very important country that the United States may not want to lose as a strategic ally,” he said.

“Turkey had been a democracy a decade ago, and it’s not today. There are big lessons to learn from Turkey, how leaders in democratic countries like Turkey could manipulate the media, manipulate one part of society with the populist rhetoric, and without violating any laws, can transform the country.”

Turkey is drifting away from the Western orbit, and aligning more with autocratic nations like China and Russia, he said.

As an example, one Turkish lawmaker recently called NATO a terrorist organization, he said.

He said Erdogan and the Turkish government were “euphoric” when President Donald Trump won the U.S. election, and condemned the anti-Trump protesters as being disrespectful to democracy following free elections.

Erdogan had differences with then-president Barack Obama, he said, because Obama armed the Kurds, and Turkey fears a separatist Kurdish movement.

He said Turkey is hopeful that Trump will be a better partner to work with it to fight ISIS, and will be more amenable to extraditing Gulen.