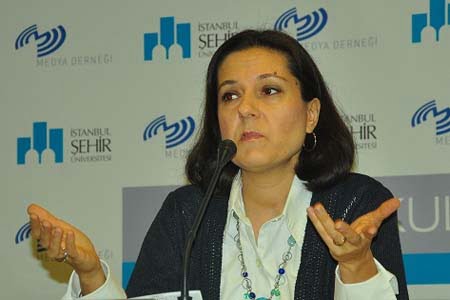 On April 24 of this year, Turkish people commemorating the 98th anniversary of the tragic events of 1915 will be joined for the first time by a foreign delegation composed of 20 anti-racist and Armenian representatives from 15 countries.

“The delegation consists of two main groups; one group is represented by people who work in organizations fighting racial discrimination, and the other group is from the Armenian diaspora,” said Levent Şensever from DurDe! (Say Stop to Racism and Nationalism!)

The organizations include the Armenian General Benevolent Union (AGBU) Young Professionals from Bulgaria, the Roma Center in Romania, which works for Roma rights, and the AGBU from France. There are also representatives from the Netherlands, Czech Republic, Italy, Croatia and Bosnia and Herzegovina working against racism.

The delegation came together this week with representatives from Turkish civil society organizations in İstanbul, including the Association of Human Rights and Solidarity for Oppressed Peoples (MAZLUM-DER), the Hrant Dink Foundation and the Human Rights Association (İHD).

April 24 is the symbolic date when about 200 Armenian religious and intellectual leaders were rounded up in İstanbul in 1915 before they were imprisoned and summarily executed.

“It is historic for the delegation to commemorate April 24 in İstanbul. It was unthinkable 10 years ago,” said Benjamin Abtan, president of the European Grassroots Antiracist Movement (EGAM), which was created two years ago to combat racism and anti-Semitism. EGAM has partners in more than 30 countries, and its partner in Turkey is DurDe!

“We all dream of a world free of racism. The issue is not just about genocide,” he said, adding that students from Şehir University, where they had a meeting on Monday, will join the group on April 24 to mourn the dead in Taksim Square in İstanbul at 7:15 p.m.

The first commemoration ceremony in recent years was held in 2010 in Taksim Square, in İzmir and in Diyarbakır. This year a commemoration is planned in İzmir and Adana. The commemoration events include panel discussions about Kurdish perspectives of the events, what happened in 1915 and the approaching 2015, when there will be international events on the 100th anniversary of the tragic events. The İHD will mark April 24 at 12:30 p.m. at the Sultanahmet Museum of Turkish and Islamic Arts, which was a prison in 1915 when prominent Armenian figures were held before they were imprisoned and then killed.

Following the commemoration at Sultanahmet, the group will visit the grave of Sevag Balıkçı, a young man of Armenian descent who was killed on April 24, 2011 while serving in the Turkish Armed Forces (TSK) as a conscripted private. His death is believed to be a hate crime committed because of the victim’s ethnic background.

Ragıp Zarakolu, Turkish human rights activist, publisher and one of the founders of the İHD in Turkey, said that the first April 24 commemoration was held in İstanbul in and that commemorations were held until 1922.

“It is significant that the April 24 commemoration is returning to İstanbul,” he said.

Answering questions from Today’s Zaman, Zarakolu said that Turkey has been having its own “spring” in the 2000s despite its problems. “Turkey has been going through a period of detachment from the official paradigm for the first time. This official paradigm is Kemalism. Having this detachment will increase respect for all the good things that the founder of the Turkish Republic [in 1923] Kemal Atatürk did for the country. But instead he was made a cult. Turkey cannot go forward with the values of the Committee of Union and Progress [İttihat ve Terakki Cemiyeti (CUP), popularly known as the Young Turks] of 100 years ago,” he said.

In celebration of its 20th anniversary, the Fountain Magazine organized an essay contest titled “What’s Your Motto?” Hundreds of essays were submitted from four corners of the world. Magdalena Rusanova from Leiden, Netherlands won the first place, winning $1,500 cash prize.