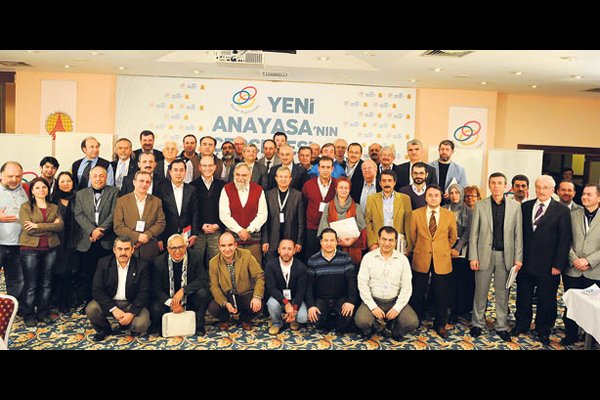 Intellectuals and legal experts discussed the constitutional drafting process during the 26th meeting of the Abant Platform. (Photo: Today's Zaman)

The 26th meeting of the Abant Platform, which discussed problematic areas of the constitutional drafting process, suggested in its final declaration on Sunday regarding education being given in languages other than Turkish — one of the most contentious issues that needs to be addressed in the new constitution — that as long as the official language of the country is taught and learned, everyone should be given the opportunity to receive an education in their mother tongue.

The Platform’s latest meeting took place in the northwestern province of Bolu between March 9 and 11 and included the participation of a wide spectrum of intellectuals, lawyers, political leaders and journalists.

During the meeting, participants examined the constitutional process through the following subjects — citizenship and identity, mother tongue education, local governments and the balance between a unitary state and autonomy, freedom of religion, religious education and the position of the president in the constitution.

Following three days of deliberation, participants at the meeting released a final statement on Sunday which included suggestions for the settlement of one of the most disputed issues in the new constitution.

For years, Turkey has aspired to change its current 1982 Constitution, which was written following the 1980 military coup and criticized by many for lacking a pro-democratic and pro-freedom approach.All parties in Parliament pledged ahead of last year’s general elections to contribute to the preparation of a new and democratic constitution for Turkey. A Constitution Commission was established by Parliament following the elections to work on the drafting of the new constitution.

Regarding the preamble of the constitution, the Platform said it should rely on principles of human rights, supremacy of law, democracy and respect to human dignity and not include any other articles like the non-amendable articles of the current constitution.

On the contentious issue of freedom of faith and the position of the Directorate of Religious Affairs (DİB), the Platform made three suggestions: “Nobody can be subjected to discrimination in education, work life or the public domain due to their religious beliefs or statements. The DİB should be given the position of a foundation with full independence, other faith groups should establish similar foundations with state support or the DİB should be funded with the optional faith tax. Similar institutions should be established for other faith groups.”

Yet another controversial issue discussed at the Platform was the issue of religious courses. The Platform suggested that the constitution should either include no provisions regarding religious lessons or it should include provisions for compulsory objective and pluralistic religious culture and moral education lessons. Either religious courses should be elective or there should be alternative courses to religious culture and moral education courses which promote critical thinking and develop pluralism with a different content.