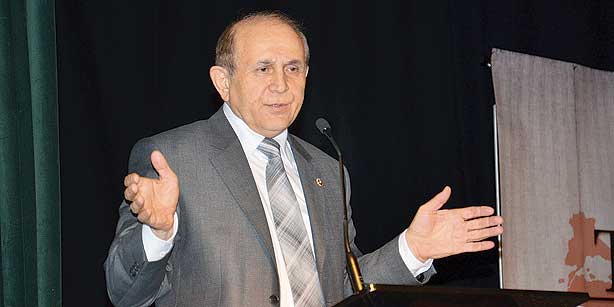 ANKARA
Profiling by the government — which a senior member of the ruling Justice and Development Party (AK Party) admitted to over Twitter — of some 2,000 senior public officials including police chiefs, prosecutors and judges as well as academics, journalists and business people is a violation of the constitution, analysts have said.

“This is like a government which, having lost its legitimacy, is moving toward its own coup d’état,” said Mehmet Altan, a respected liberal opinion leader and a professor of economics at İstanbul University.

In Dec. 31 posts on his Twitter account based on the pro-government Akşam daily’s previous news report about the government’s alleged profiling, AK Party deputy and Parliament’s constitutional commission head Burhan Kuzu said, “an intelligence report that was submitted to the prime minister detailed a parallel structure within the state,” and added that some 2,000 names are listed in that report.

In an article that appeared on Dec. 3, Akşam said that an intelligence report presented to Prime Minister Recep Tayyip Erdoğan demonstrated the existence of a parallel state structure in state institutions. “If the [second] operation had not been blocked, a smear campaign would have been launched [against the government],” the daily claimed.

Kuzu’s acknowledgement was the first admission indicating that Prime Minister Erdoğan’s government replaced hundreds of police officers and other government employees in rushed decisions and without clear justification against a backdrop of a massive corruption investigation launched by prosecutors in İstanbul that has implicated some senior members of the government and their close relatives.

For Altan, the government’s recent blocking of a second wave in the corruption probe in which Bilal Erdoğan, the son of Prime Minister Erdoğan, was also allegedly included — as well as the owners of some of Turkey’s leading construction companies that have won public tenders in recent years — amounts to a coup d’état of civilian nature. “This government has carried out a coup and some of those 2,000 people represent the first people that the government is likely to arrest,” Altan commented.

A senior member of the ruling party, Kuzu also admitted that the government foiled other possible investigations against it in 42 provinces. Comparing Turkey to an aircraft, Kuzu said the latest corruption investigation attacked the pilot, Erdoğan, and added, “Don’t forget that we are all on the same plane.” He described those attacking Erdoğan as heartless backstabbers, but he didn’t provide any names.

Noting that the AK Party recently prevented the police from obeying the instructions of a prosecutor and a court in a second phase of the corruption probe, Altan commented: “If, in a country, police do not obey a prosecutor’s orders, then it is no longer possible to talk about the constitutional legitimacy [of the government].”

In a series of public remarks, Erdoğan talked about gangs and parallel structures within the state that pulled the trigger on the recent corruption operation against his government. He said global powers have been working with these gangs to oust his government and overcome the national will that expressed itself through general elections in 2011.

Erdoğan’s remarks were a veiled reference to a civic movement called Hizmet, inspired by Islamic scholar Fethullah Gülen, which has been active in education, charity and community volunteer work. Gülen’s lawyer denied any involvement in the recent graft probe and strongly rejected any link to the case. “The first thing to be said is that profiling is a crime,” Günal Kurşun, president of the Human Rights Agenda Association (İHGD), told Today’s Zaman. Noting that profiling is a violation of personal freedoms that are under the protection of the Constitution, Kurşun, who is also a professor of law at Çukurova University, said: “A state should in no way profile its own citizens. If such a list has really been drawn up, those who have done so committed a crime.”

In a shocking graft probe in mid-December, the first phase of the graft probe, sons of three former ministers — Interior Minister Muammer Güler, Economy Minister Zafer Çağlayan and Environment and Urban Planning Minister Erdoğan Bayraktar — were initially detained. Two, a son of Güler and one of Çağlayan, were arrested afterwards.

Prosecutors sent a summary of graft investigation proceedings to Parliament, asking for the legislative immunity of four now former ministers of the AK Party, Güler, Çağlayan, Bayraktar and EU Affairs Minister Egemen Bağış, to be lifted. The ministers have been accused of taking bribes or, in the case of Environment and Urban Planning Minister Bayraktar, of paving the way for building contractors to obtain unlawful profits.

Erdoğan, seemingly seeing that he himself would be a target through his son, Bilal, and possibly others in the government, did not allow the police to go after the suspects in a second phase of the graft probe that was supposed to take place a week after the first.

“If claims [about profiling] are correct, then the issue is extremely worrisome,” Ergun Özbudun, a professor of constitutional law at İstanbul Şehir University, told Today’s Zaman.

Erdoğan described the graft probe as a foreign plot and removed from their positions hundreds of police officers, including those conducting the investigation. And, by amending a regulation, the government forced police chiefs to inform their superiors before acting on prosecutors’ orders in investigations and appointed two additional prosecutors to supervise the ongoing corruption case, a move described as a blunt intervention in the graft investigation.

Erdoğan described the graft probe as a foreign plot and removed from their positions hundreds of police officers, including those conducting the investigation. Additionally, by amending a regulation, the government forced police chiefs to inform their superiors before acting on prosecutors’ orders in investigations and appointed two additional prosecutors to supervise the ongoing corruption case, a move described as a blunt intervention in the graft investigation.

According to Ertuğrul Günay, a former deputy of the ruling AK Party, the profiling of civil servants is an act that is unacceptable in a state where the rule of law presides. “The statements [recently] made [by AK party officials on the profiling issue] are diametrically opposed to what government spokespersons had said [earlier],” Günay told Today’s Zaman. “In a sense, this would come to mean that profiling [by the state], which we believed we had gotten rid of with the referendum in 2010, still continues,” he added.

The Taraf daily wrote that the government’s attitude would encourage bureaucrats to inform on each other, saying that a certain person has close ties to a certain political or religious group. “Bureaucrats have begun to denounce one another as supporters of the Hizmet movement or sympathizers with the Gezi protests that rocked the country at the beginning of summer,” the daily claimed.

Günay is as concerned as about the future of democracy in Turkey and the future of society as Özbudun. “The elimination, on the occasion of this operation [as part of the graft investigation], of people from various public positions who are believed would investigate corruption cases is worrisome,” he commented.

“A wave of denouncing [civil servants] the same as that which happened during the Feb. 28 post-modern military coup [in 1997] is being seen again in this period,” the daily said.

According to İdris Bal, a former AK Party deputy who, like Günay, recently resigned from the party, the discourse of the government with respect to the profiling is reminiscent of that of fascism. “If people have not violated the law, then profiling people according to the newspaper they read, where they live and the singers to whom they listen is not democracy but [representative of] a regime where repression reigns,” he told Today’s Zaman. Bal believes the ruling party, by claiming that the Hizmet movement and foreign powers are plotting against it, is actually trying to water down and conceal the claims of corruption in the government.

The government should respect Turkey’s independent judiciary and the Journalists and Writers Foundation (GYV), the honorary chair of which is Gülen, the GYV said in a statement published on its website at the beginning of the week.

The GYV also said that it rejects conspiracy theories such as those involving a “deep state” and “parallel structures” as well as accusations of “treason,” “espionage” and “collaboration with international powers” against the interests of Turkey.

The GYV said these theories are simply part of a smear campaign against the Hizmet movement and suggested that the government is attempting to distract the public from the scandal.

The organization said it has repeatedly called on the government to submit whatever evidence it has of shady structures within the state to the judiciary.