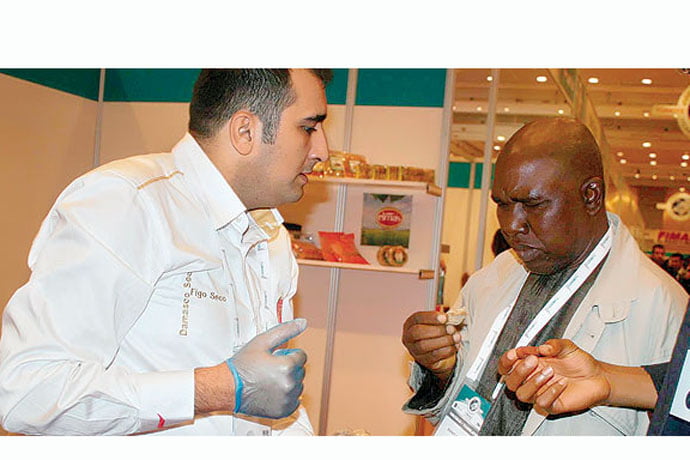 The second day of a global trade and investment summit in İstanbul saw increased interest from African companies in Turkish markets, with some major deals in the works.

Organized by the Turkish Confederation of Businessmen and Industrialists (TUSKON), the World Trade Summit opened its doors to visitors from around the world on Monday. The summit, which will run through Nov. 26, is hosting 1,343 foreign firms and 800 local firms and expects to facilitate 25,000 business-to-business transactions.

The TUSKON summit is sponsored by the Economy Ministry and the Turkish Exporters Assembly (TİM).

The summit’s second day saw a number of African businesses sign investment and trade deals with their Turkish counterparts in various sectors including retail, food, media and agriculture. The theme of the TUSKON summit is food and agriculture, and the participating companies are focused on these industries.

One of the African entrepreneurs at the TUSKON summit was Thokozani Zulu from South Africa. The son of the autonomous Zulu region’s king, Zulu has agreed to buy food retail goods worth TL 10 million ($5 million) from Turkish suppliers. Underlining the importance South Africa has attached to rapprochement between Turkey and African nations over the past decade, Zulu said his company expected to further increase trade links with Turkish partners. Zulu said his firm would make new investments at home to provide jobs for thousands of unemployed youths.

Tanzania’s Orbit, a firm active in the construction and agriculture sectors, also had a presence at the summit. Orbit representatives said they were looking for Turkish partners to make investments in Tanzania. An entrepreneur from Malawi, Kush Mittal, said he had held talks with Turkish companies on working together in the energy and food sectors.

The summit also attracted African media companies. One of them is Senegalese D-Media; the company’s CEO, Bougane Gueye, said the firm is considering buying broadcast rights for Turkish TV series. “Different series from different countries are popular in Senegal. We heard how Turkish products have made fame in this surrounding region and we are close to bringing them into our country soon,” he told Today’s Zaman.

Firms from the Americas were also busy at Tuesday’s summit, including Grupo Pão de Açúcar (GPA), South America’s largest retailer. The company has been looking into importing food items from Turkish providers since last month. Cristiana Campos, from the Brazilian company’s marketing division, told Today’s Zaman that GPA had agreed to buy Turkish products at the summit. Another South American company at the summit was Paraguay’s DVC, and general manager Daniel Villacorta said the firm will buy Turkish food products worth $1 million.

This is the 18th edition of the TUSKON event. The previous summits saw more than 28,000 foreign and 50,000 Turkish businesspeople participate, making deals worth an estimated $26 billion.