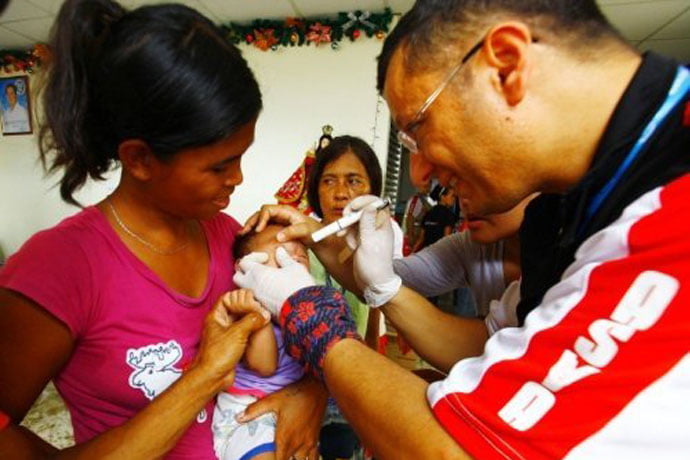 The Turkish medical team keeps healing the wounds of Haiyan victims in Philippines. Serving an average of 600 Filipinos daily, the Kimse Yok Mu team recently performed a surgery and saved a newborn inflicted with inflammation on head. Having lost their all to the typhoon, the infant’s once well-off parents had come to KYM team’s Tacloban facility and pleaded for help.

The 10-member medical team, comprised of nurses and assistants in addition to 5 doctors, is in service of the locals from early in the morning until late at night.

The team also came to rescue of those suffering from scars in their arms and feet due to metal roofs where they sought refuge to escape the giant waves during the typhoon. The victims expressed their gratitude to the doctors for their care and treatment. Additionally, the medical team provided tetanus shots if demanded and gave away toys to the little victims.

The KYM rescue and disaster relief teams had arrived in the wake of the typhoon that hit Leyte and the surrounding islands on November 8th causing a combined total of approximately 10 thousand death toll and missing. The teams intend to monthly provide convenience food, staples to three thousand families and clothing to 5 thousand, over four months. In an effort to assist permanently, KYM is going to launch an office and a logistics warehouse in the region.

KYM volunteers have delivered food aid in the amount of 130 tons to date. They have reached out to 1,200 Filipinos daily and are gearing up for the target 2,000. Tacloban Mayor’s wife was present during the inaugural hot meal service.

KYM Search and Rescue Team (ASYA) Director, Ismail Buyukay, reported their overall post-disaster activities. Buyukay said they arrived in the region under tough conditions in order to provide hot meal, staples and healthcare to the victims. He further noted they are there to offer comfort as well to the locals in need. Speaking of the emotional needs of the victims besides material ones, “The deputy-governor wrapped his arms around me and cried,” Buyukay said. “Despite the long distance in between, the Filipinos very much like Turkish people. And we had the opportunity to witness Turkish people do not remain indifferent to the call “Is anybody there?” no matter where,” he added.

The medical team alike underscored the gravity of healing those in need and wiping out their tears. The doctors said they formed a good dialogue with the locals, who haven’t lost their hope. The medical team thanked everyone involved for their assistance to the victims and hoped the efforts continue permanently.

The Kimse Yok Mu association, renowned as a global charity that manages to reach the most remote corners of the world, has inaugurated a new boarding school in Kyrgyzstan for children without parents. The new home for children, which is the result of a $2.284 million investment, was inaugurated by Kyrgyz President Almazbek Atambayev in a ceremony.

KYM* has started construction of a medical center in Northern Kenya near Dadaab Refugee Camp as well as delivering food and medical aid to those Somalians who are suffering with hunger and thirst. The Somalian people had migrated with their families to Dadaab Refugee Camp, which is on the Kenya-Somalia border, between June and July […]