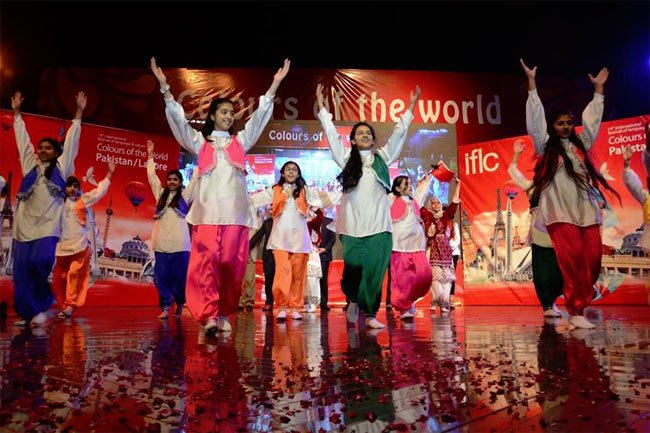 Grand Finale of Pakistan round in the 14th Annual International Language and Culture Festival was held at Expo Centre Lahore on Saturday February 27, 2016. Minister Education Government of the Punjab, Rana Mashhod Ahmed and Minister for Excise and Taxation Mian Mujtaba Shuja-ur-Rehman were the guests of honour in the event. With a packed venue of over 1,000 people combined from all walks of life, everyone enjoyed together this festive atmosphere of live performances presented by the PakTurk students.

Melodious songs in Turkish and Urdu language, presented by the students from different branches of PakTurk International Schools & Colleges, inspired both the jury members and the audience. Cultural dances, presenting the rich diversity of cultures from different provinces of Pakistan was highly appreciated by the audience. Renowned singer Mr. Khalid Baig also won the hearts of the audience by presenting his melodious songs. Anchor persons of the program, kept the audience involved and engaged till the end.

While speaking on the occasion, Minister Education Rana Mashhod Ahmed Khan congratulated the students for their amazing performance. He also appreciated PakTurk schools for spreading the message of peace and harmony, in addition to their great services in the field of education. Rana Mashood also distributed prizes among PakTurk students who got top positions in the world and in the education boards during the recent exams.

In his address, Minister for Excise and Taxation, Mina Mujtaba Shuja-ur-Rehman expressed his pleasure over the mesmerizing performance presented by the students. He commemorated PakTurk schools for the successful organization of this festival. He said that Pakistan and Turkey had strong relations not only on leadership level but most importantly on people level.

As a whole, the program offered a great time in an exciting ambiance to the audience and depicted the multicultural and diverse face of our nation.