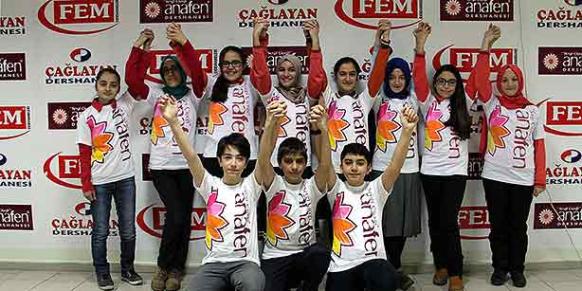 Students who attend the Anafen Dershaneleri prep schools pose with friends to celebrate their success in the TEOG exams held in November and December 2014. (Photo: Cihan)

The Ministry of Education announced the results of the TEOG exam on Jan. 9, a postponed date, after three separate students filing complaints against two exam questions.

Some 1.2 million eighth graders took the TEOG exam. Students were asked 120 questions on language, mathematics, science and technology, history, foreign languages and ethics. The ministry announced that 67 students took the TEOG exam at their homes, three from hospitals and 6,121 from halls for single students in exceptional health or disability cases.

Anafen Dershaneleri Diyarbakır Director Mustafa Kaya told Today’s Zaman that 52 students who attended prep courses in Anafen in cities in southeast Turkey answered all 120 questions correctly. According to Kaya, 16 students in Diyarbakır, 15 in Şanlıurfa, eight in Batman, four in Adıyaman, three in Mardin, two in Şırnak, two in Muş, one in Bingöl and one in Bitlis scored 100 percent.

Flaws in the education system are largely compensated for by preparatory schools that help students prepare for centralized high school and university exams at affordable prices.

Parliament passed a law earlier in 2014 to close these schools, which led to public anger that the absence of preparatory schools will deal another blow to the already low level of education in the east and southeast and draw young people in the regions into the hands of terrorist organizations. According to the law, introduced by the Justice and Development Party (AK Party) government, prep schools will not be allowed to operate from Sept. 1, 2015 onward.

In a big success story in Şanlıurfa province, 12 students from private Çağlayan Okulları answered all 120 questions correctly on the TEOG exam. The total number of students who scored 100 percent in Şanlıurfa is 15. The school’s other 14 students answered 119 questions out of 120 correctly.

Eleven students from private Kahramankent Middle School, another Hizmet-affiliated school, in Kahramanmaraş province correctly answered all 120 questions on the TEOG exam. School Director Alparslan Kömüşçü said planned and systematic preparation for the exam brought success to their students. Kömüşçü added that he expects more students will answer all the questions correctly in the next semester’s TEOG exam.

The TEOG exam was adopted at the beginning of the 2013-2014 academic year as a new high school admission mechanism, replacing the previous Level Determination Examination (SBS) exam. According to the TEOG system, eighth-graders must take 12 exams in six subjects during the academic year. Students take six tests in the fall and the second half of the full set of exams during the spring semester.

İstanbul’s Fatih Koleji, Ankara’s Samanyolu and Atlantik Okulları and İzmir’s Yamanlar Okulları, which have been put under pressure by the AK Party government, picked up 64 medals out of 120 in November 2014 in the 22nd National Science Olympiad and the 19th National Mathematics Olympiad for primary and secondary schools. The schools’ names were not announced after the winners’ names for the first time at the award distribution ceremony on Nov. 19.

Some private schools, Fatih Koleji, Samanyolu, Atlantik and Yamanlar Okulları among them, which are affiliated with the Hizmet movement, have been targeted by the AK Party and government circles since Dec. 17, 2013, when a massive corruption and bribery scandal implicating AK Party circles became public. President Recep Tayyip Erdoğan accuses the Hizmet movement and its sympathizers in the state bureaucracy of being behind the Dec. 17 operations targeting government corruption.