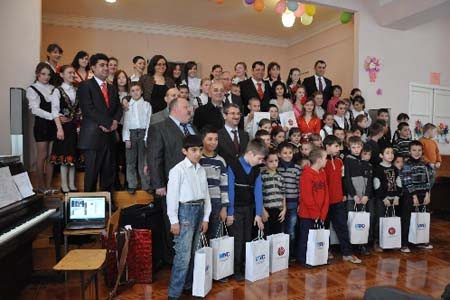 The students of Orphan School-3 in the capital greeted their guests with the traditional bread and salt welcome ceremony. Ambassador of Turkey to Chisinau Mehmet Selim Kartal and his wife presented the gifts and were responded with “thank you” in Turkish by students in unison. “Our people’s altruism has transcended national borders. They are lending hand to those in need regardless of language, faith and race” ambassador Kartal said.

The orphan school officials stated that their major problems are vocational training and clothing shortage and thanked the institutions for their aid.

The kindred nation Gagauz people were remembered too. The delegation, next, visited the orphan school located in Autonomous Territorial Unit of Gagauzia and delivered sportswear presents to students. TIKA coordinator Atilla Karamollaoglu said, “We witness that the donations serve the purpose. I can feel that our 75 million population too cheer up with these students.” Moldovan-Turkish Businessmen Association President Abdullah Sezis said, “We will keep on assisting regardless of language, faith and race. I would like to thank to the staff taking care of these children.”

Source: [in Turkish] on Cihan, April 8, 2013. English translation is retrieved from HizmetMovement.Com