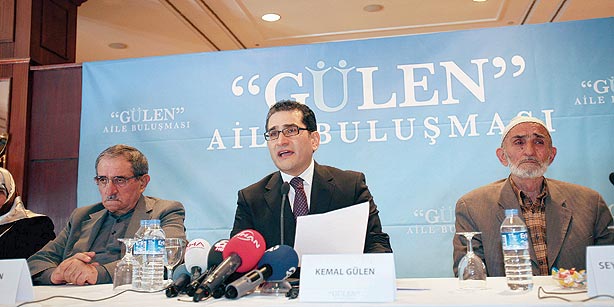 Family members of Turkish Islamic scholar Fethullah Gülen held a press conference in İstanbul on Sunday, in which Kemal Gülen, the scholar’s nephew, spoke for the family and said that the government’s offensive language has turned various groups against each other, leading to social polarization.

Fethullah Gülen, who has constantly been targeted by Prime Minister Recep Tayyip Erdoğan in his recent speeches, does not respond unless otherwise necessary and his conscience dictates that he should step in, Kemal Gülen stated. “Fethullah Gülen is a great man of thought and action, one who was raised by this nation and is embraced by the whole world. Anyone who would hurt him hurts the people of Anatolia,” said Kemal Gülen.

Kemal Gülen also pointed out that not only Fethullah Gülen himself, but all the members of the Hizmet movement that he inspired, are under attack as part of a defamation campaign being carried out by the Turkish government in recent months. According to Kemal Gülen, Prime Minister Erdoğan is stoking the fires of this campaign.

“The current government is controlled by anger. Some who were manipulated by it also got carried away and are now captive to this anger and hate. Common sense and consciences are no longer functional,” said Kemal Gülen.

Stating that state bodies are being used in the campaign to smear the Hizmet movement, Kemal Gülen said, “We are asking, as his family, based on what right are you conducting this defamation campaign using state-run media and the police forces?”

Kemal Gülen further said that government-backed media outlets have been libeling and slandering the Islamic scholar as well as his family members for over three months. Touching upon some false information recently circulated about the Gülen family and their ancestors that suggested they were of Armenian origin, Kemal Gülen said: “We are not racist and we are against every kind of racism. However, some dark forces are trying to manipulate the facts about Fethullah Gülen’s heritage, which is an example of using the racism directed at both [Armenians and Turks]. Nobody can be blamed for their race, skin color or family.”

Kemal Gülen also stated that the Turkish public is at a point where no parent can allow his or her child to attend a party rally or even watch a political rally on television, because party leaders have adopted a discourse of slang and profanity.

Kemal Gülen added that the ruling Justice and Development Party (AK Party) had initiated some positive things, such as the settlement process that aims to resolve the Kurdish issue in Southeast, initiatives for the rights of Alevi community and Roma people. “We supported these developments that raised hopes for democracy,” said Kemal Gülen, noting that Fethullah Gülen has never opposed these initiatives.

Kemal Gülen also addressed allegations about the scholar’s financial situation, explaining that Fethullah Gülen resides at a facility that belongs to a foundation and for which he pays rent, rejecting the claim that the scholar owns the property.