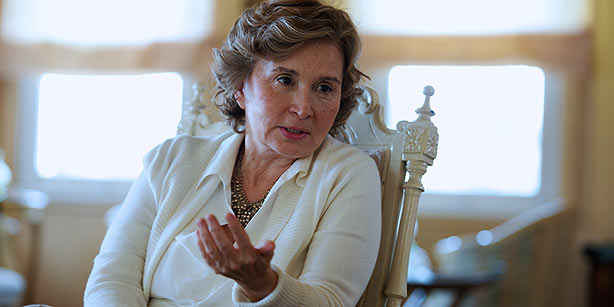 Veteran Turkish journalist Nazlı Ilıcak was fired on Wednesday from her long-time post at the Sabah daily over a “disagreement on issues,” according to the pro-government newspaper.

Ilıcak, who has been critical of Prime Minister Recep Tayyip Erdoğan’s government for quite some time, took an equally critical stance regarding a recent investigation into alleged bribery linked to public tenders.

She said on her Twitter account on Wednesday that she had lost her job instead of her integrity. “I thank God that I did not follow the wrong path,” she added.

The veteran journalist said the Turkish prime minister should have adopted an assertive stance with regard to the graft probe, which has cast doubts over the government’s legitimacy. She held that the ministers whose sons are suspected of being involved with the graft should have resigned.

Sabah said it had parted ways with Ilıcak due to a disagreement over a number of issues, but declined to elaborate further on a possible link between Ilıcak’s dismissal and her stance regarding accusations of government involvement in the corruption case.

In a recent interview on Bugün TV, Ilıcak said it would go against her conscience to say that there is no political pressure on the media. “I am convinced that pressure has been used as a method against political criticism. This is how the climate feels,” she said.

This came against a backdrop of a series of firings of journalists over the past year due to government pressure on media.

On March 18, experienced journalist Hasan Cemal parted ways with the Milliyet daily, for which he had been working since 1998, following a controversy over the paper’s publishing of secret minutes of a meeting between the terrorist Kurdistan Workers’ Party (PKK) leader and Kurdish deputies earlier in March.

Cemal decided to quit his job at the daily when an article he sent to the daily to be published in the same week was rejected by editor-in-chief.

Additionally, the Milliyet daily, which had fired a number of columnists who were critical of the Justice and Development Party (AK Party), has suspended the column of Derya Sazak, an opinion writer for the paper who was also its editor-in-chief until a recent crisis.

Sazak’s last column was published in Milliyet on July 29, 2013. He was told after returning from vacation on which he had been since that date that his column would no longer be needed, according to a report by Internet magazine T24.

Veteran Turkish journalist Yavuz Baydar was also fired from Sabah on July 23, after its editorial board censored two of his columns related to the Gezi Park protests and media-government relations.

Ilıcak’s case constitutes the latest incidents in a series of firings of journalists in the Turkish media which have brought press and government relations into the spotlight and cast further doubts on the democratic credentials of the EU candidate.

Ilıcak said the daily called her earlier in the morning to inform her on the parting of ways. Ilıcak said she didn’t expect the daily’s decision, which came at a critical moment. She rejects that her columns were mainly anti-government, adding that firings in the Turkish media have become a regular occurrence.

Ilıcak, who also faced tremendous pressure from the military during the Feb. 28 coup period after her revelations of the some generals’ involvement in editorial decisions of some Turkish media outlets in producing manipulative news targeting critical journalists, said she experienced harder days following the coup, which forced a democratically elected civilian government to resign.

Meanwhile, access to a news portal that was recently built by journalist Mehmet Baransu was temporarily blocked after he uploaded documents on the corruption probe and accusations against the ministers involved.

On Thursday, Emre Uslu, a columnist for Taraf, posted a photo of the blocked website, announcing that Baransu’s domain, yenidonem.com, was blocked although there were no legal problems with it.

Baransu has been harshly criticized by members of the government and has been called a traitor for publishing secret National Security Council (MGK) documents a few weeks back.