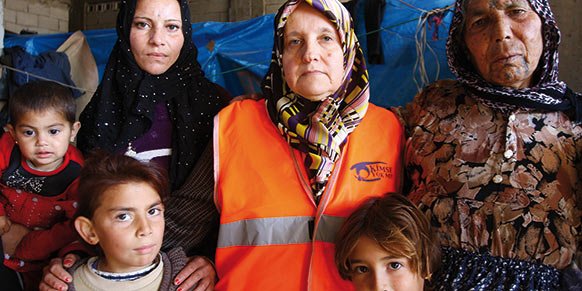 In a project jointly carried out by Turkish charity Kimse Yok Mu and the Office of the United Nations High Commissioner for Refugees (UNHCR), 2,900 Syrian families comprising some 17,000 people, most of whom are women and children who fled the civil war in Syria and sought refuge in Turkey, are being provided with financial aid totaling TL 3.5 million ($1.5 million).

The families in need, who live in Gaziantep, Kilis, Nizip, Reyhanlı and Yayladağı, will be able to receive the financial assistance through special bank cards.

Each of the families receiving the financial assistance will be given an ID number and will be registered in the Kimse Yok Mu project system, which is a reporting system that keeps track of what those benefitting from the financial aid spend their money on. By providing information about what refugees need, the project will be the foundation of further steps to be taken as part of the aid project.

Thanks to face-to-face discussions with and comprehensive surveys of 2,900 families who were seen to be unable to earn a living, the needs of these families were determined. The research found that most of those in need were women and children below the age of 12. The refugees, who are unable to meet their basic needs such as housing and clothing, also face the risk of falling ill with the arrival of cold winter weather.

Savaş Metin, the coordinator of the project and Kimse Yok Mu secretary-general, who noted that they have extended efforts to help Syrian refugees from the moment the civil war in Syria started, said in a written statement that under the scope of the project in which the charity is a solution partner to the United Nations, those in need were identified with the help of volunteers who serve Kimse Yok Mu, the municipalities of the towns where refugees live and nongovernmental organizations. “This project will pave the way for refugees to spend [the money] based on their own needs,” Metin added.

Nedra Katib, a 55-year-old widow who lives with her five children in a house in Kilis province, is one such refugee. Her husband died in a bomb blast while selling sahlep on the streets of Syria. Telling her story to officials from the charity, she said: “I have lost everything: my husband, my house. Suffering from hunger and thirst, we managed to somehow cross the border on foot. We sought shelter in this house with my five children. It is only my son who can work. He earns TL 20-30 [$9-13] a day.”

The family has their meals at a soup kitchen run by Kimse Yok Mu in Kilis. Katib, who said she was paying TL 700 ($308) in rent for the house, expressed her happiness with the project, saying, “With the card you gave, I will first buy shoes for my children.”

The total aid, financial and in kind, Kimse Yok Mu has provided so far to Syrian refugees in Turkey is worth TL 42 million ($18.5 million).