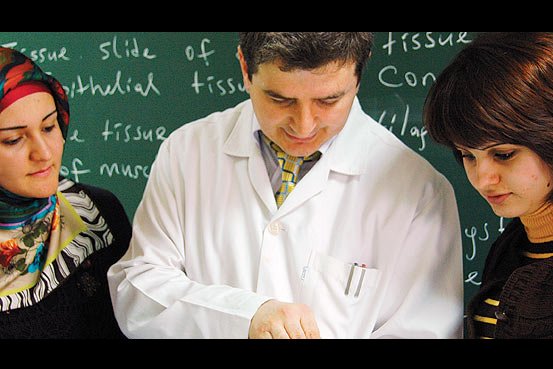 Ishik University, established in 2008, serves the multiethnic society of Arbil in Northern Iraq by providing equal education opportunities to students from a variety of backgrounds, said Dr. Mehmet Özdemir, vice president of administrative affairs for Ishik University. Speaking to Sunday’s Zaman on Thursday, Özdemir explained that when the Turkish university was established, it had only an English language department and an English language preparatory school.

Currently, it has six faculties, including dentistry, engineering, economics and administrative sciences, education, law and science. Majors in dentistry, computer and civil engineering, business and management, information technology, English language teaching and mathematics are offered. Additionally, there is a preparatory school and language centers that were established just a month and a half month ago, after the university moved to a new building. This new structure is one of the few smart buildings in the city.

Noting the high quality of education and discipline provided by the professors, Özdemir said, “Our teachers set a great example for teachers of other schools, who come to watch the conduct of our teachers in our classes in order to gain a better understanding of our teaching style.” He added, “They say, ‘We take your teachers as an example because you focus so much on your students’.” The university, which is among eight universities in the city, has about 1,300 students and a teaching staff of about 80, but this is expected to be expanded to 100 by the end of the year.

Kurdistan Regional Government Prime Minister Nechirvan Barzani recently expressed his admiration for Ishik University for providing students with the confidence and skills they need to succeed and for contributing to the increasing literacy in the region.

He stated, “Ishik has earned its place among the public on its own — not through an introduction by higher authorities; this tells us that what Ishik has been doing is right.” He also underlined that while many private schools now want to move into the region, Turkish schools have continued to serve students without pause even during chaotic times, filling a great role in society at the times this mattered most.

In an interview published in the university’s newspaper, Arbil Governor Nawzad Hadi said, “Students studying at Ishik are very lucky, so they should try their best to take advantage of the higher educational standards and we will provide any help and support needed to resolve any problems for them in order to maintain these standards.” Özdemir also noted that 60 percent of the student body is female. Parents who prefer their children to be educated at a trustworthy university where ethical values are also considered part of education send their children to Ishik, he added.

He also explained that a year and a half ago, the Higher Education Board closed down the faculties of medicine at all private universities because there was an excessive number of students graduating from these faculties, as medicine is considered the most prestigious profession by students and society in general. The faculty of dentistry at Ishik University is the only medical faculty of a private university that has not been closed and continues to accept students. The program was allowed to remain open thanks to its high standards in education and currently has 90 students. In addition to a dental clinic that is operated by the university’s professors, who supervise students’ hands-on learning, the university plans to build a hospital in the near future to serve the public.

The school covers between 20 and 30 percent of students’ tuition costs depending on their score on an examination administered by the Kurdish Regional Government’s Education Ministry and depending on the department for which they have applied. The language of instruction is in English except for courses offered by the faculty of law, for which the language of instruction is Arabic.