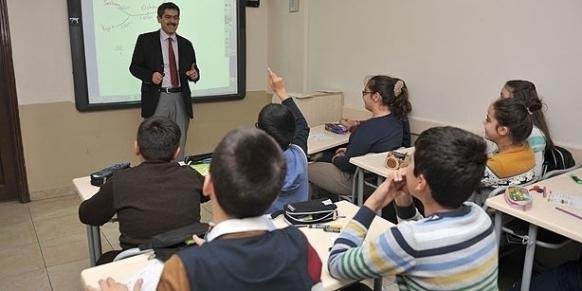 A general view of a classroom in a prep school in Ankara. (Photo: Today's Zaman, Mevlüt Karabulut)

The 25-page report, titled “Evaluation of the legal base of shutting down of dershanes,” contains the legal aspects of the prep school closure. The report was released in January 2015 by the İstanbul Institute’s Center for Social Policy Studies.

The report reveals that law goes against Article 2 of the Constitution, which lists the characteristics of the republic; Article 5, which describes the fundamental goals and tasks of the state; Article 10, which discusses equality; Article 13, which delves into restriction of fundamental rights and freedoms; Article 17, which says that “everyone has the right to the protection and development of tangible and intangible assets”; Article 44, which says that “no one can be deprived of education and training” and Article 49, which lists the principles of nationalization and privatization.

In a surprise move, the ruling Justice and Development Party (AK Party) decided in November 2013 to shut down Turkey’s prep schools and for that purpose, a bill was passed into law in March of last year, stirring a massive debate. According to the law, prep schools will no longer be able to operate as such after Sept. 1, 2015 and must convert to standard high schools if they wish to remain in operation.

It is stated in the report that the dershanes are private enterprises that have characteristics of public service providers, thus they cannot be considered private institutions because they are defined and established through the law.

From this point of view, prep schools cannot be closed down legally under Article 47 of the Constitution. However, the same article paves the way for nationalization, but the article also says that nationalization can take place only when the public interest necessitates it.

In Turkey, extreme importance is placed on the college entrance exam, thus creating the demand for supplemental preparatory institutions. Critics of the law have said that the prep schools level the playing field for students aiming to attend university because the prep courses are relatively affordable. These schools, with their affordable fees, are regarded by mostly middle and lower-income families as an equalizing force when it comes to seeking a better education for their children.

The report also emphasizes that nationalization must be done by taking into consideration “real value,” meaning that the current worth of a prep school should be paid to the owner when it is nationalized. According to the law passed by the government, prep schools have two years to become regular schools and will be prohibited from operating as study centers. If they do not make the switch during this period, fines ranging from TL 500,000 to TL 1 million will be imposed on them.

The announcement to shut down the schools sparked a rift between the government and the Hizmet movement, which is inspired by Islamic scholar Fethullah Gülen, because a significant percentage of the schools are owned by those associated with the movement and the ensuing revenue constitutes a major portion of the movement’s financial dealings.